A Thanksgiving Feast With a Side of Owl

As for many years now, Thanksgiving Day began with the Macy's parade. I still remember fondly waking up upon Thanksgiving morning and rushing to get breakfast so I could park myself before the television and watch the parades on CBS. They had the "Thanksgiving Parade Jubilee," showing parts of the J.L. Hudson parade in Detroit (Hudson's is long gone, but one of their offspring survives: Target; the parade survives as "America's Parade," I discovered this year), Gimbel's parade in Philadelphia (Gimbel's is gone, but Philly still has a parade), the pre-recorded Eaton's Santa Claus Parade (which, as I read in a book about the parade, long confused Canadian broadcasters on why the Americans wanted a Christmas parade on Thanksgiving; Eaton's is also gone, but Toronto still holds the parade), and finally the Macy's Thanksgiving Day parade usually coming in last to present Santa Claus. In the real "old days" it was hosted by Captain Kangaroo from the Treasure House, later William Conrad took over the host duties from a richly-appointed men's den, drinking a toast at the very end. Later they ditched the Hudson's parade and started showing a parade from Hawaii with Jack Lord as the host (who the dickens wanted to watch flowers on Thanksgiving? I wondered), and Gimbel's got tossed in favor of a Walt Disney parade. Now CBS also has Macy's coverage and I heard the CW has the parade from Philadelphia. Probably had I known the latter I might have changed channels. Macy's has turned into, amazingly, not a big ad for Macy's, but a big ad for a bunch of young singing stars. Most of them were good, but who really cares? The announcers spend too much time yapping and promoting upcoming NBC shows.

This year, it was the commercials that were amazing. First came a four-minute epic from Xfinity, about a distant traveler who comes home for the holidays. Next came a magical visit to "The Time Shop" (I want to visit there!) with echoes of Narnia. And finally a little girl gets to ask all those pressing things a kid wants to know from the oddest of sources.

In the meantime James was in the kitchen cooking up goodies for our Friendsgiving feast, corn casserole and brown-sugar-glazed carrots, plus we had some Belgian chocolate seashells to bring along. We set the National Dog Show to recording and skipped out about one o'clock to find the feast about to begin at the Lucyshyn house. We had turkey, duck, pot roast, spiral-sliced ham, a whole passel of vegetables, Ron's mashed potatoes, a relish tray, bread, and, after all that, two kinds of pies, blondies, the chocolates, and brown bread with raisins (Oreta had to give out the recipe for the latter because it was so popular). We spent the time chatting, enjoying, and digesting.

The apex of the day was just after the sun had set. A line of orange and yellow was still on the western horizon, brightening the gap between two houses behind the Lucyshyn back yard, but above it, it was beginning to get dark and a quarter moon with Venus dangling beneath it was hung in the deep blue western sky just above the orange streak. I only had my phone with me, but I thought I might try to take a picture of it. So I went outside and snapped several photos.

Clair had followed me outside and both of us heard an owl hoot several times. Clair suddenly said "There it is!" and  pointed out the tallest tree in the neighborhood, silhouetted black against the southwestern sky. There at the top of the tree was the owl—we could see it stretch out every time it hooted, showing its head and tail! And then a few minutes later a second owl flew up to the same tree, different branch, and they hooted back and forth at each other for a few minutes, sketched against the sky like an Arthur Rackham illustration. Magical! 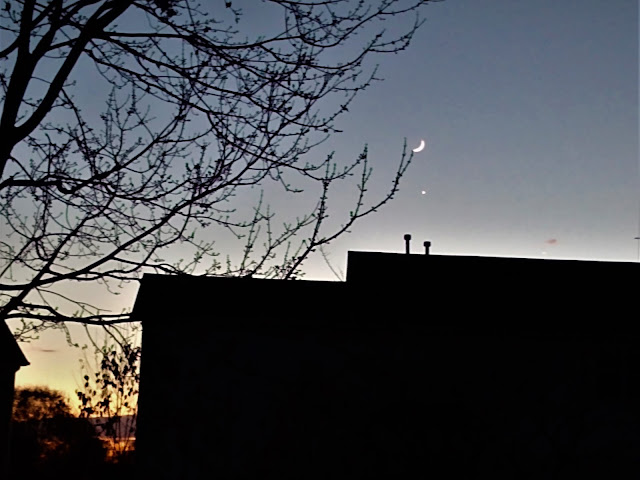 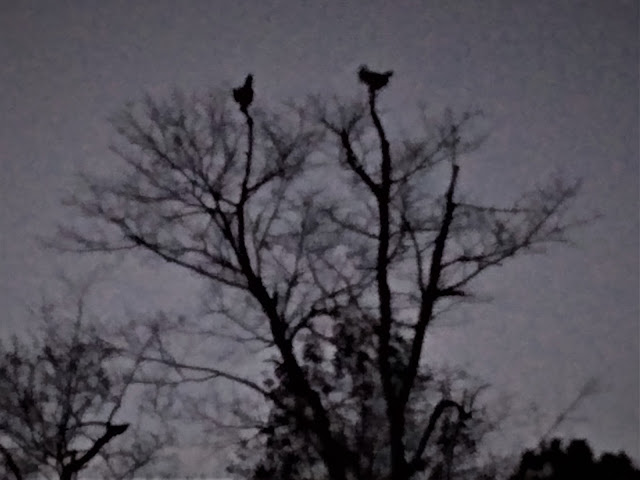 We drove home after admiring yet again the neighborhood overachievers nearby (the house at the very entrance of the development across from Alex and Pat's development) who had the front of their house covered with lighted Christmas trees, a manger scene, Snoopy on his doghouse, light spheres hanging from the trees, and so much more. (As a friend of mine might say, it looked like something had barfed up Christmas all over the place.) When I got home I went to the Cornell Ornithology website to identify the hoots, and it seemed we had two Great Horned Owls up in that tree! Clair confirmed that it was probably mating season for them, and what we saw might have been an attempt at courtship.

Turkey for dinner, owls in the night sky, and budgie song when we got home: that's what I call a Thanksgiving Day!
Jotted down with a jingle by Linda at 10:26:00 PM