Some poetry for the day!

who found you in the green forest
and were you very sorry to come away?
see          i will comfort you
because you smell so sweetly

i will kiss your cool bark
and hug you safe and tight
just as your mother would,
only don't be afraid

look          the spangles
that sleep all the year in a dark box
dreaming of being taken out and allowed to shine,
the balls the chains red and gold the fluffy threads,

then when you're quite dressed
you'll stand in the window for everyone to see
and how they'll stare!
oh but you'll be very proud

Sounds intriguing. I thought so. Bought the book.

Fezziwig comes to Scrooge as a ghost, pleading with him to help his young assistant Tom Guilfoyle, just as a young woman, Adelaide Owen, comes to the counting house to apply, to Scrooge's astonishment, for the clerking job he's advertised. When Scrooge and Adelaide go to Fezziwig's home to see if he is indeed dead, it's revealed that Tom is well known to Adelaide, and that the local constable believes Scrooge himself murdered Fezziwig. Next thing you know, Scrooge is endeavoring to clear himself, with the help of Adelaide and a young reporter named Charles Dickens, in the terrible underbelly of London's slums.

Let's say this is no cozy about Scrooge helping to find a murderer. Before chapter four is over Scrooge has been beaten up by some underworld types and been exposed to a brothel catering to wealthy men. Mixed up in Fezziwig's death is a Chinese merchant, a nobleman, an obese businessman, a well-known actress, aforesaid thugs, and a prostitute named Annie Piper. Along the way we meet a whole contingent of Dickens' characters, including Bill Sykes, the Artful Dodger, Nancy, Fagin, a gang of boy thieves, Miss Favisham, John Jasper, Mr. Crisparkle, and Mr. Pickwick, not to mention Dickens himself, and are involved in murder, mutilation, torture, sexual slavery, depravity, drug addiction...this is not a pretty book!

We all know London at the time of Dickens was like this, so the whole thing wouldn't be so bad, wading through the gore and abuse, if the book wasn't full of historical inaccuracies and Scrooge here doesn't jibe with later Scrooge—in fact, this book describes him here, in 1833, as "young Ebenezer" when ten years later in A Christmas Carol, he's suddenly "old Scrooge"—and the modernisms that creep into the text are alarming and often hilarious. The police didn't operate the way the author states, Marley is Scrooge's competitor, not partner, and four years after the first photograph was taken suddenly photos look so good that pornographic ones are being sold to toffs for £40 each. As for the modernisms: Scrooge tells a constable "Cut to the chase," which dates back only to silent movies. A page later he tells the same man, "You have a mind like a steel trap. Anything entering gets crushed and mangled"; "mind like a steel trap" goes back to 1836 but this is a direct quote from later on. On page 51 Scrooge believes he will get "hypothermia" from falling in the Thames and lose "core motor skills." Would a 19th century man have used those terms? On page 75 Dickens refers to the Chinese man as "the Asian." Really? Back then they were "Orientals" or, jocularly, "Celestials," when more crude referrals were not used.

The book is very good describing the sordid London underworld of the 1830s. There are some truly terrifying situations and passages. But as a prequel to the character of Scrooge and A Christmas Carol? I'll say it...humbug!
Jotted down with a jingle by Linda at 10:12:00 PM 0 comments

One More for Epiphany

Reminisce Christmas
A 2010 publication by "Reminisce" magazine, this is a follow-on to their previous compendium of memories, The Christmases We Used to Know. These aren't fictional experiences, but stories about Christmas by the people who lived them, from the 1930s to the 1960s (with a smattering of photos from the 1920s). Vintage toys, World War II military-themed Christmas cards, special pajamas or cowboy suits, family photos, faith-based stories, and vintage advertisements are pictured, paired with memories nostalgic, funny, and a few times just plain sad, some of them full stories, some just vignettes. There are even lined, blank spots every 30 pages or so where you can write down your own memories of Christmas past.

Brought up as I was with Italian Christmas customs, it was fun to see what other nationalities had "on the menu," so to speak: roast goose, lutefisk, Cajun gumbo, etc., but every turn of the page is a delight for Christmas lovers. There are tales from servicemen and -women in faraway places on Christmas Eve, stories of poor children who received special gifts in a needy time, people who received that special toy (and in the case of one child, a special gift that turned out to be a baby brother), Christmas pets, visits to Santa (and learning the truth about him), those "skinny Charlie Brown trees" from the past, and other Yuletide keepsakes.

If you like "Reminisce," nostalgia, or Christmas, this is the book for you! 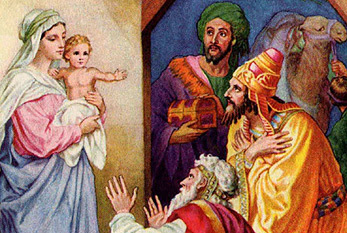 On the first Christmas, Joseph and Mary and the Baby Jesus were visited not only by shepherds, but by three kings, who brought the baby gifts of gold, frankincense, and myrrh.

Well, not quite. The visitors who brought these gifts are not present in Luke's gospel, which features the shepherds. The story of the visitors is from Matthew's gospel, and says, in fact, that the Holy Family were living in a house and most translations say Jesus was a child, not an infant. So it is probable that the visit took place later than the birth in the stable.

The visitors are never identified as kings, but as astrologers, men who study the stars for portends, also known as "magi," magicians. Nor are strictly three identified. No mention is made of how many magi visited, or whatever other gifts are given; only mentioned are the gold, frankincense, and myrrh (which, scholars tell us, are symbolic gifts: gold for godhood, frankincense for priesthood, myrrh, which was used on bodies of the dead, predicting His crucifixion), so tradition makes it three.

The Carols of Christmas, Andrew Gant
I have several books on the history of Christmas carols, so I was very pleased to see a new one in the stacks of Christmas publications. Gant's is pretty much devoted to the story of English carols, although "O Little Town of Bethlehem" and "Jingle Bells" make appearances, so if your favorite carol isn't here, that may be why.

This book's greatest novelty is also what might turn people off about it: it's written for people who have a knowledge of music and musical terms. If you're confused by the use of terms like "demi-quaver" and "semi-quaver" and "plainsong" or don't wish to pick your way through Latin and French verses, you might want to pick up Ace Collins' simpler Stories Behind the Most Beloved Songs of Christmas. For those who stick with Gant, you'll enjoy his puckish sense of humor as he traces some of the well-known hymns back to old folksongs sung in regional variations by the poor, some of them even rather bawdy. Then there's "Good King Wenceslas," with its words set to a French song about the spring! From Advent through Epiphany, you'll learn what "wassail" is, which carols have different melodies depending which side of the Atlantic they're on, and a theory about how the partridge, a ground bird, got up that pear tree. Great reading, especially for music lovers.

The Oxford Book of Christmas Poems, edited by Michael Harrison and Christopher Stuart-Clark
This is a companion book to The Oxford Book of Christmas Stories, both ostensibly for children, but as I commented in my review of the latter, definitely for older children, since you won't find cloying sweetness about puppies and Santa here. In fact, some of the poetry is definitely aimed at adults, from T.S. Eliot's "Journey of the Magi" to W.H. Auden's "Well, That is That." The poetry ranges from winter odes through Christmastide and through Epiphany and the dead of winter, some playful, some thoughtful, a few even tragic, like the grim Victorian "Christmas in the Workhouse," with a few terrifying pen-and-ink illustrations. A charming "Haiku Advent Calendar" enlivens the endpapers and a magical poem about a boy's discovery of the Nativity is told in "Journey Back to Christmas." Worth finding if you are a poetry aficionado or just wish to read some different and descriptive verse for the holiday season.

Re-read: The House Without a Christmas Tree, Gail Rock
This "novelization" of the classic Christmas special about Addie Mills has no dependence of the special itself, and indeed Rock gives the characters more background than they were able to provide in the filmed story, expanding Addie's exploration of her world and especially giving more depth to Grandma and her eccentricities. Seeing that this story is based on Rock's life, we may have gotten more insight into what the grandmother who cared for her was like. We also see more of Carla Mae's home life, and the end of the story is structured differently from the television production. The wonderful illustrations by Charles Gehm are also a plus. A must-have for an Addie Mills fan.

Re-read: The Best Christmas Pageant Ever, Barbara Robinson
This is the just plain funny, but ultimately touching, story of six undisciplined kids who terrify their classmates and drive their neighbors crazy. The Herdmans—Ralph, Imogene, Leroy, Claude, Ollie and Gladys—are pretty much on their own all the time; their father has vanished, their mother works two shifts to support them. They steal, blackmail their classmates, harbor a dangerous cat, and are generally a nuisance. The only place safe from them is church, until a kid named Charlie tells one of them that the minister gives out free treats.

Told in a fast and funny narration by our unnamed narrator (Charlie's sister), we follow the Herdmans as they get involved with the church Christmas pageant—first having to learn the story of the Nativity from scratch. As the chaos grows, the pageant is threatened with cancellation, but a surprise is in store for everyone.

Peppered with such delightful descriptions like "My friend Alice Wendleken was so nasty clean she had detergent hands by the time she was four years old," this is one of my annual reads which brings a smile to my face every time.
Jotted down with a jingle by Linda at 10:21:00 PM 0 comments

Christmas in the American Southwest, from World Book
The impression you get of Christmas in Arizona, New Mexico, Oklahoma, and Texas is light: candlelight, farolitos, luminaria, and electric lights in profusion around gardens, river walks, adobe buildings, and streets. Fireworks are lit off at public celebrations and in the past, Christmas was celebrated with firecrackers and sparklers.

In this volume in World Book's "Christmas in..." series, the gamut of celebrations is chronicled, from Las Posadas to cowboy dances, from Victorian buildings decorated with pinon and tumbleweeds to warm cabins at the very bottom of the Grand Canyon covered in snow, accessible only by mules. The contributions of Germans/Poles/Czechs join Spanish- and Native-heritage celebrations, and of course the annual ranch celebrations are featured. The brilliant color photographs highlight foods, public places, and, yes, lights, lights, lights.

A bright and happy edition to add to anyone's "Christmas in..." collection.
Jotted down with a jingle by Linda at 8:50:00 PM 0 comments 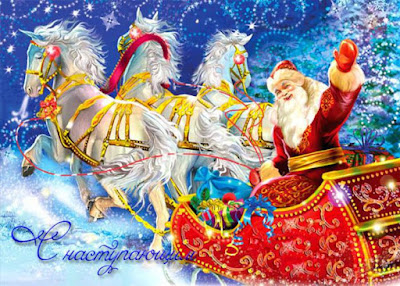 Why Ded Moroz is Infinitely More Badass Than Santa Claus 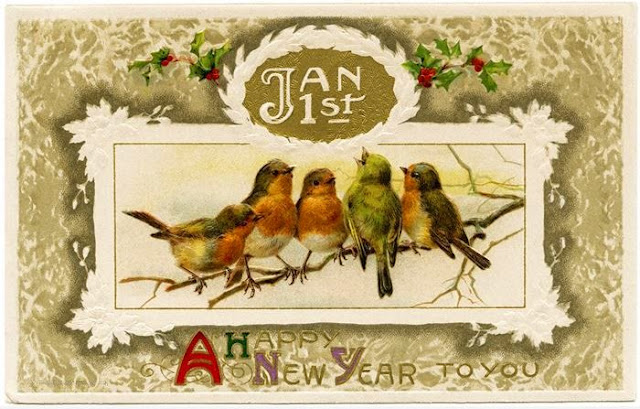