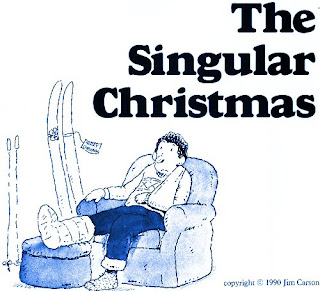 The Christmas Survival Book, one of my go-to reads before the holidays, has a chapter about "the singular Christmas." You know the one, where there's a death in the family, a car accident, a hospitalization, or even an emotional shock (author Lawhead uses as one example a woman who told her husband she was leaving him on Christmas Day). I've had singular Christmases, like 1983, when my cousin Sonny was killed by a drunk driver on December 23rd. And some semi-singular Christmases we've had when James had to work and either got sent home early or was able to telework, so we could have dinner with friends but later than usual.

This year we thought we might have another "singular Christmas" as COVID-19 captured the world. However, we had a close circle of friends that have been keeping a low profile during the chaos, and as we gather once a month for haircuts, we thought it would be safe for Christmas dinner. It would be the same group of people, who have been mostly home-bound since March, and we planned to wear masks when not eating. Such was our plan until yesterday afternoon.

We managed to have fun yesterday despite the fact that it was deeply grey, cold, and raining. We did the usual grocery shopping in the morning (the store was slammed, but everyone was very good-humored) and wished everyone in earshot at Publix a Merry Christmas, then came home for lunch and watched Forged in Fire Christmas (they had to make George Washington's sword). Then we decided we needed to do something to cheer up the day, so we did a "drive-by Christmas gift drop." We told Alice we were coming and she left our gifts on a table on their porch and I took those and swapped them with our gifts and waved to Alice through the windows. Then we drove to Mel and Phyllis' house and dropped off late Hanukkah gifts. It was raining in earnest then and starting to get colder and we didn't stop to talk (Phyllis standing six feet away under the roof of the carport and me in a mask) very long. Our final stop was at the Boulers, where we left their bag with the gifts in it on their doorknob, the trip there only interrupted by a brief stop at Lidl to get bread and onions.

We had Tucker with us, since I'd had to take him out a second time in the afternoon because he wouldn't stay out in the rain this morning. He was interested in the trip until he realized it didn't involve food or going for a walk and then he got bored and yawned a lot.

We did make a happy discovery on the way home: Hibachi Grill has reopened! Oh, and it was sleeting instead of raining.

Anyway, it was at least fifteen degrees colder when we got home as when we left, so much so that the rain turned into snow for about a half hour (nothing that stuck; it just looked pretty with the birds at the feeder), and I was damp from getting in and out of the car, so I made some hot chocolate when we got home.

Here's where it went pear shaped. James said, "Wow, I'm cold. I'm so cold I'm shivering." He'd never gotten out of the truck, and at Lidl he'd put the heater on.

I took his temp about three times during the afternoon and he had no fever. But James was visibly shaking and he was flushed. I made dinner (our usual Christmas Eve dinner of macaroni and gravy with pork in it) and he had no appetite and didn't eat much. (He could still smell the gravy and the macaroni, and still taste. He just wasn't hungry.)

And then his temperature started to inch up. 99.5...100.1...100.8...it topped out late that night at 101.5. He finally called the Advice Nurse at Kaiser. She said if we were worried to take him to Urgent Care, but if Tylenol kept the temperature under control we could do self-care. However, if his temp kept going up or if he had any of the warning signs of COVID-19 we needed to make haste to Urgent Care.

Luckily, the Tylenol did keep the temp under control. It got to 99.5. We got through The Homecoming (after my nerves sent me running to the toilet every twenty minutes) and the weather report and pieces of two different Midnight Masses. Then James took a lukewarm shower, and he really did look better afterward; the flush was gone. We finally got into bed about 1:30, and slept all the way until ten, with one potty break at eight.

Ironically, James looked better at eight than he did at ten. At ten he was flushed and his temp back up to 100.5. And he was by then so hungry he was feeling nauseated. Once he ate he was fine, and after the Tylenol, continued to improve. He's been under 100 most of the afternoon.

We didn't really have any lunch, just a good breakfast. Then we broke into the gifts. I got a new Mercedes Lackey paperback, a new wallet (really needed!), and a book-themed mask. I got James the PanAm game he wanted and two other World War II books. We also opened our gifts from Alice and Ken (plenty of keen things including a no-touch soap dispenser) and the big red "Royal Mail" bag from the Lawsons which was full of Terry Pratchett-related things, a nice basin, and other goodies. About two James fixed himself some soup and I ate a bun from Lidl. My stomach was too upset thinking of having to take him to Urgent Care. Late in the afternoon we noticed he had a little rash forming on his left foot, where he also has an ingrown toenail. We have been trying to get into podiatry for three straight weeks now so they can fix the nail; all they said was we'll call you back about an appointment but in the meantime if it looks infected to go to Urgent Care and get antibiotics for the infection. Well, it hasn't looked infected, and I should know, because I'm the person taking care of the toe. However, it does need attention and Urgent Care will not do that.

After this afternoon I'm wondering if the temp is one of two things: an infection in the toe (even though it doesn't look infected) or a UTI. The Urgent Care nurse said that with the fever the one thing he needed was liquid, liquid, liquid, and I don't think he's let out as much as he's taken in.

But anyway...definitely a singular Christmas. This afternoon we've been quietly watching some videos (a history of Christmas and of Santa Claus, The House Without a Christmas Tree, and now I've been watching Ask the Manager Christmas episodes while James surfed the net). Luckily we had turkey thighs in the freezer. We'll have them for dinner with stuffing and some boiled potatoes (I can't rouse enthusiasm for the carrots), and watch more Christmas until the holiday episode of Call the Midwife comes on.