I'm already collecting Christmas books for reading this year. Some are holdovers from last year, as I had quite a few things on last year's pile.

Santa, by Jeremy Seal, is a British book I heard about while listening to the author read it on BBC Radio 7 (now BBC Radio 4X). It's a whimsical look at the history of Santa Claus from his origins as St. Nicholas.

Another holdover from last year is a Mary Higgins Clark Christmas mystery book, Dashing Through the Snow. She has a half-dozen of these little Christmas mysteries; this will be my first.

Yet another holdover is Christmas 1945, which I wanted as soon as I saw it last year, but never managed to get to before the season was over. It's nonfiction about the first Christmas after the end of World War II.

Plus just recently I found a book I didn't even know about, Tis the Season TV, subtitled "The Encyclopedia of Christmas Themed Episodes, Specials and Made-for-TV Movies," by Joanna Wilson. How could I resist? (I wonder if she's going to put out a second edition; I have descriptions for all the Lassie episodes she only had titles for. :-)

(I may not wait for Christmas to start the latter. It's like a bag of peanuts just begging to be eaten.)
Jotted down with a jingle by Linda at 12:13:00 AM 0 comments 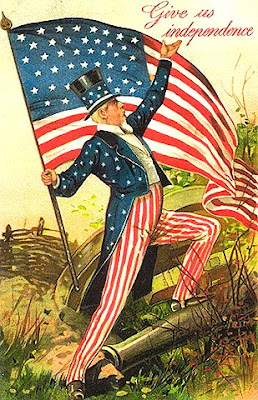 Happy birthday to the United States of America! It's a day of picnics, gatherings, fireworks, and fun. It's also a day to think about our past and hope and work for the future.

I included this next postcard because I was thinking of all those old children's books, like Eight Cousins and The Bobbsey Twins in the Country where the children get together and put on a little patriotic parade. The pertinent chapter from the latter serves as a demonstration of what children worked up for themselves, without adult intervention, in the early 20th century. 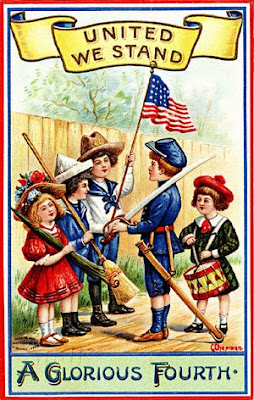 The day following the picnic was July third, and as the Meadow Brook children were pretty well tired out from romping in the woods, they were glad of a day's rest before entering upon the festivities of Independence Day.

"How much have you got?" Tom Mason asked the Bobbsey boys.

"Well, I've got thirty-five, and we had better get our stuff early, for Stimpson sold out before noon last year," concluded Tom.

"I have to get torpedoes for Freddie and Flossie, and Chinese fire-crackers for Nan," Bert remarked, as they started for the little country grocery store.

"I guess I'll buy a few snakes, they look so funny coiling out," Tom said.

"I'm going to have sky rockets and Roman candles. Everybody said they were the prettiest last year," said Harry.

"If they have red fire I must get some of it for the girls," thoughtful Bert remarked.

But at the store the boys had to take just what they could get, as Stimpson's supply was very limited.

"Let's make up a parade!" someone suggested, and this being agreed upon the boys started a canvass from house to house, to get all the boys along Meadow Brook road to take part in the procession.

"Can the little ones come too?" August Stout asked, because he always had to look out for his small brother when there was any danger like fireworks around.

"Yes, and we're goin' to let the girls march in a division by themselves," Bert told him. "My sister Nan is going to be captain, and we'll leave all the girls' parts to her."

"Be sure and bring your flag," Harry cautioned Jack Hopkins.

"How would the goat wagons do?" Jack asked.

"Fine; we could let Roy and Freddie ride in them." said Bert. "Tell any of the other fellows who have goat teams to bring them along too."

"Eight o'clock sharp at our lane," Harry told them for the place and time of meeting. Then they went along to finish the arrangements.

"Don't tell the boys," Nan whispered to Mildred, as they too made their way to Stimpson's.

"Won't they be surprised?" exclaimed Mabel.

"Yes, and I am going to carry a real Betsy Ross flag, one with thirteen stars, you know."

"Oh, yes, Betsy Ross made the first flag, didn't she?" remarked Mildred, trying to catch up on history.

"We'll have ten big girls," Nan counted. "Then with Flossie as Liberty we will want Bessie and Nettie for her assistants."

"Attendants," Mabel corrected, for she had seen a city parade like that once.

It was a busy day for everybody, and when Mr. Bobbsey came up on the train from Lakeport that evening he carried boxes and boxes of fireworks for the boys and girls, and even some for the grown folks too.

The girls could hardly sleep that night, they were so excited over their part, but the boys of course were used to that sort of thing, and only slept sounder with the fun in prospect.

"Are you awake, Bert?" called Harry, so early the next morning that the sun was hardly up yet.

"Yep," replied the cousin, jumping out of bed and hastily dressing for the firing of the first gun.

The boys crept through the house very quietly, then ran to the barn for their ammunition. Three big giant fire-crackers were placed in the road directly in front of the house.

"Be careful!" whispered Bert; "they're full of powder."

But Harry was always careful with fireworks, and when he touched the fuses to the "cannons" he made away quickly before they exploded.

"Hurrah!" shouted Freddie, answering the call from his window, "I'll be right down!"

All the others too were aroused by the first "guns," so that in a very short time there were many boys in the road, firing so many kinds of fire-crackers that Meadow Brook resounded like a real war fort under fire.

"Ouch!" yelled Tom Mason, the first one to bum his fingers. "A sisser caught me right on the thumb."

But such small accidents were not given much attention, and soon Tom was lighting the little red crackers as merrily as before.

"Go on back, girls!" called Bert. "You'll get your dresses burnt if you don't."

The girls were coming too near the battlements then, and Bert did well to warn them off.

Freddie and Flossie were having a great time throwing their little torpedoes at Mr. Bobbsey and Uncle Daniel, who were seated on the piazza watching the sport. Snoop and Fluffy too came in for a scare, for Freddie tossed a couple of torpedoes on the kitchen hearth where the kittens were sleeping.

The boys were having such fun they could hardly be induced to come in for breakfast, but they finally did stop long enough to eat a spare meal.

"It's time to get ready!" whispered Nan to Bert, for the parade had been kept secret from the grown folks.

At the girls' place of meeting, the coach house, Nan found all her company waiting and anxious to dress.

"Just tie your scarfs loose under your left arm," ordered Captain Nan, and the girls quickly obeyed like true cadets. The broad red-white-and-blue bunting was very pretty over the girls' white dresses, and indeed the "cadets" looked as if they would outdo the "regulars" unless the boys too had surprises in store.

"She wouldn't come because she had no white dress," Mildred answered.

"Oh, what a shame; she'll be so disappointed! Besides, we need her to make a full line," Nan said. "Just wait a minute. Lock the door after me," and before the others knew what she was going to do, Nan ran off to the house, got one of her own white dresses, rolled it up neatly, and was over the fields to Nettie's house in a few minutes. When Nan came back she brought Nettie with her, and not one of her companions knew it was Nan's dress that Nettie wore.

Soon all the scarfs were tied and the flags arranged. Then Flossie had to be dressed.

She wore a light blue dress with gold stars on it, and on her pretty yellow curls she had a real Liberty crown. Then she had the cleanest, brightest flag, and what a pretty picture she made!

"Oh, isn't she sweet!" all the girls exclaimed in admiration, and indeed she was a little beauty in her Liberty costume.

"There go the drums!" Nan declared. "We must be careful to get down the lane without being seen." This was easily managed, and now the girls and boys met at the end of the lane.

"Hurrah! hurrah!" shouted the boys, beating the drums and blowing their horns to welcome the girls.

"Oh, don't you look fine!" exclaimed Harry, who was captain of the boys.

"And don't you too!" Nan answered, for indeed the boys had such funny big hats on and so many flags and other red-white-and-blue things, that they too made a fine appearance.

"And Freddie!" exclaimed the girls. "Isn't he a lovely Uncle Sam!"

Freddie was dressed in the striped suit Uncle Sam always wears, and had on his yellow curls a tall white hat. He was to ride in Jack Hopkins' goat wagon.

"Fall in!" called Harry, and at the word all the companies fell in line.

Then Flossie walked the very first one. After her came Nan and her company. (No one noticed that Nettie's eyes were a little red from crying. She had been so disappointed at first when she thought she couldn't go in the parade.) After the girls came Freddie as Uncle Sam, in the goat wagon led by Bert (for fear the goat might run away), then fifteen boys, all with drums or fifes or some other things with which to make a noise. Roy was in the second division with his wagon, and last of all came the funniest thing.

He had a gun under his arm and looked too comical for anything.

It was quite warm to wear a big fur robe and false face, but under this was Jack Hopkins, the bear Teddy, and he didn't mind being warm when he made everybody laugh so.

"Goodness gracious, sakes alive! Do come see de childrens! Ha, ha! Dat sure am a parade!" called Dinah, running through the house to the front door to view the procession.

"My!" exclaimed Mrs. Bobbsey; "how did they ever get made up so pretty!"

"Oh, we must get the camera!" Mr. Bobbsey declared, while the whole household, all excited, stood out on the porch when the parade advanced.

Such drumming and such tooting of fifes and horns!

Freddie's chariot was now in line with the front stoop, and he raised his tall hat to the ladies like a real Uncle Sam.

"Oh, the bear! the bear!" called everybody, as they saw "Teddy" coming up.

By this time Mr. Bobbsey had returned with the camera.

"Look this way. There now, all ready," said Mr. Bobbsey, and snap went the camera on as pretty a picture as ever covered a plate.

"Right wheel! forward march!" called Nan again, and amid drumming and tooting the procession started off to parade through the center of Meadow Brook.