"Rudolph Day" is a way of keeping the Christmas spirit alive all year long. You can read a Christmas book, work on a Christmas craft project, listen to Christmas music or watch a Christmas movie. This month I've been reading two books of short stories.

A Christmas Memory, One Christmas & The Thanksgiving Visitor, Truman Capote
This slim volume collects all of Capote's famous holiday stories together. "A Christmas Memory," the most well-known, is the simple, joyful and slightly melancholy story of young "Buddy" and his best friend, his elder cousin Sook. Each year before Christmas she declares it "fruitcake weather" and together they bake for people they have met and liked. Later they hunt for a Christmas tree and make gifts for each other. This is a classic for a reason: it's a heartwarming story. In "One Christmas," Buddy visits his absentee father while being half homesick and half looking forward to his father buying him fabulous gifts. Sadly, the visit goes badly. "The Thanksgiving Visitor" returns to the familiar home in Alabama and Buddy's relationship with Sook. He is aghast when the kindly Sook, who knows the boy's mother, invites bully Odd Henderson to the family Thanksgiving dinner, then decides to take an epic revenge on his tormenter. It doesn't quite work out as planned. Sook, of course, is luminous, but if you were charmed by Buddy in the first two stories, he comes off less well in the final tale. 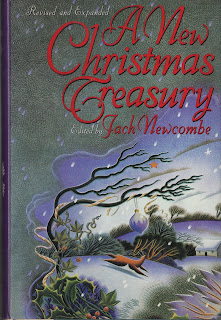 A New Christmas Treasury, edited by Jack Newcombe
The trouble with collecting books of Christmas short stories is that eventually there are stories that always repeat, including part or all of A Christmas Carol. This collection by Jack Newcombe tries to break that mold, but there are some repeats here: "A Christmas Memory," for one, Andersen's "Fir Tree," Washington Irving's "Christmas Eve," the poem "Christmas Trees" by Frost, such sweet repeats as Grahame's "Dulce Domum" and Potter's "Tailor of Gloucester," and of course Virginia assured there is a Santa Claus. However, Newcombe tries hard to avoid most of the cliches, and sometimes it works. Instead of A Christmas Carol, we join the Pickwick Club on a Christmas journey, and, less successfully, join a snowbound man at "The Holly Tree," an inn, a tale I found a bit pointless. John Cheever's "Christmas is a Sad Season for the Poor" has a touch of cynicism to it that is amusing, a collection of chapters from Thomas Hardy's Under the Greenwood Tree revisits the old custom of "the Waits" who sing carols along the country roads, and there are two nostalgic reminisces from Coffin ("Christmas in Maine") and Engle's "An Iowa Christmas." Instead of Laura Ingalls Wilder's "Mr. Edwards Meets Santa Claus," we get a grimmer Christmas during The Long Winter.

Some stories are just sad, like Ring Lardner's "Old Folks Christmas" in which a couple prepare a fabulous holiday for their college-age children, only to find the kids want to spend all their time with their fast-living friends, and "A Christmas Dinner," in which the only friendly face a South African white boy sees while visiting his family is a wandering black man who shows up after the family has left him home alone to do something else. Also noted: Shirley Jackson's "A Visit to the Bank," a classic Christmas ghost story "The White Road," and George Plimpton's funny tale of one-upsmanship, "The Christmas Bird Count." A selection of poetry, O'Henry's "Gifts of the Magi," essays, and short Christmas excerpts found out this volume well worth finding despite the occasional off piece.
Jotted down with a jingle by Linda at 1:21:00 AM 0 comments