We didn't do trick or treat this year.

My initial reaction was like Dark Willow: "Bored now."

Really. Even in costume it's no fun sitting on the stairs for two hours waiting to give out candy while the rest of the household is in comfy chairs upstairs getting to watch a real television while I'm stuck with bits and pieces on a laptop. (The only place I'm comfy in costume is at science fiction conventions.) This delayed end of Daylight Wasting Time has made it even worse. On Eastern Standard Time it's dark by six o'clock, and you're done with everything by eight. Now it doesn't get dark until 6:45. Who was the wretched idiot in DC who thought up this nonsense? (Oh, wait. Wretched idiot. Washington, DC. That describes 98.2 percent of the population.)

I love seeing the little kids come by. They are always adorable. I love the ones who are too little or too awed to speak, especially at the lady with the spider in her hair (me, last year). I like even the larger ones, in costume. Too many "Scream" masks for my taste, but at least they make the effort.

What I don't like is what my mom used to call "the big horses," the older kids and teens who slouch around, no costume, with a grocery store bag for treats. If you want a treat, at least work a little for it, okay? Put on a leisure suit from granddad's closet or even a basic set of Groucho glasses. And, really, if you're six feet tall, trick or treating? Really?

What I don't like is when you run out of candy, shut the lights, and people continue to ring the doorbell. Last year we had kids pounding on the door at 9:30! Heck, some of our older neighbors go to bed at 9:30.

So this year I said the hell with it. I had things to do at work right until we left on vacation and no time to decorate for Hallowe'en at lunchtime (I didn't even take lunch the day before we left; I had a Microslop Word document that was scarier than any zombie out there). I wasn't going to decorate Sunday or Monday while coping with three loads of laundry and airing out suitcases. And by yesterday, who cared? Not to mention that I was unable to leave work early today like I wanted to—traffic is alway horrendous on Hallowe'en—and it took me nearly 90 minutes to get home.

I turned out every light at the front of the house when I got there, including Mom's horse lamp in the foyer, which is always on, and we had only one light on in the living room besides the television, and I never turned on the lights on the porch. Despite that, half a dozen doorbells rang, including one going off when I wasn't three mouthfuls into my supper.

To you who had big yard displays, dressed in costume, took your kids out door to door, I hope you had a blast! For the first time since 1995 I had a nice Hallowe'en: I spent the evening with my husband, our bird, and our dog. I didn't have to gulp my dinner and get indigestion afterwards. I sat happily watching Jeopardy and then It's the Great Pumpkin, Charlie Brown; the For Better or For Worse Hallowe'en special "The Good-for-Nothing," and the remarkably cheesy television movie from the 1970s, Midnight Offerings, with "sweet little Mary Ingalls of Little House on the Prairie," Melissa Sue Anderson, as a bitch of a teenage witch (her innocent counterpart was Mary Beth McDonough, Erin of The Waltons).

In the spirit of the evening, then, Happy Hallowe'en! 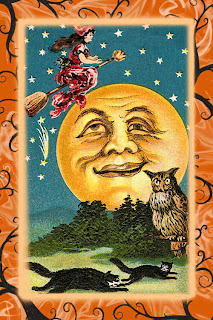 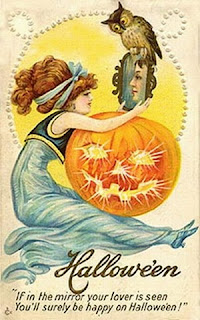 Disney's Haunted Halloween — an educational short with bits from Disney cartoons and the Haunted Mansion.

The Legend of Sleepy Hollow — narrated by Bing Crosby.

Fall always reminds me of one of my favorite passages from Rebecca of Sunnybrook Farm:

It was a glorious Indian summer day, which suggested nothing of Thanksgiving, near at hand as it was. It was a rustly day, a scarlet and buff, yellow and carmine, bronze and crimson day. There were still many leaves on the oaks and maples, making a goodly show of red and brown and gold. The air was like sparkling cider, and every field had its heaps of yellow and russet good things to eat, all ready for the barns, the mills, and the markets. The horse forgot his twenty years, sniffed the sweet bright air, and trotted like a colt; Nokomis Mountain looked blue and clear in the distance...

A gorgeous leaf blew into the wagon.

"Does color make you sort of dizzy?" asked Rebecca.

"Perhaps dizzy isn't just the right word, but it's nearest. I'd like to eat color, and drink it, and sleep in it. If you could be a tree, which one would you choose?"

Emma Jane had enjoyed considerable experience of this kind, and Rebecca had succeeded in unstopping her ears, ungluing her eyes, and loosening her tongue, so that she could "play the game" after a fashion.

"I'd rather be an apple-tree in blossom,--that one that blooms pink, by our pig-pen."

Rebecca laughed. There was always something unexpected in Emma Jane's replies. "I'd choose to be that scarlet maple just on the edge of the pond there,"--and she pointed with the whip. "Then I could see so much more than your pink apple-tree by the pig-pen. I could look at all the rest of the woods, see my scarlet dress in my beautiful looking-glass, and watch all the yellow and brown trees growing upside down in the water. When I'm old enough to earn money, I'm going to have a dress like this leaf, all ruby color--thin, you know, with a sweeping train and ruffly, curly edges; then I think I'll have a brown sash like the trunk of the tree, and where could I be green? Do they have green petticoats, I wonder? I'd like a green petticoat coming out now and then underneath to show what my leaves were like before I was a scarlet maple."