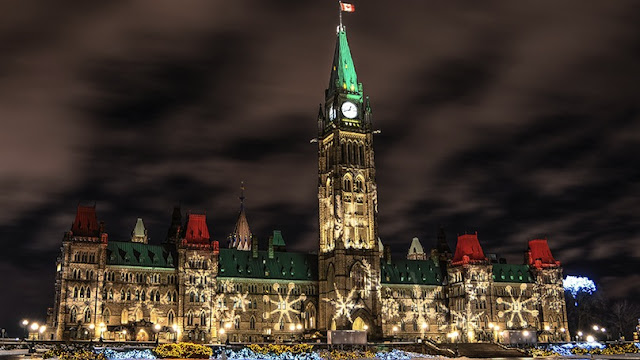 At this time of year, with the temperature already having reached 90°F, my mind has drifted somewhere cold. Not cooler, as in New England or Minnesota, but really cold: Canada. We went to Canada on vacation several times when I was a child, before terrorists ruined the world for everyone and you could just drive over the border with an legal ID and an inspection on the way back. I remember the French signs in Quebec (and having to advise my dad what to do at a gas station, as you could still get leaded gasoline in those days; I remembered that sans was French for "without" and the scientific name for lead being "plumbium"—thank you, science class!—so it was safe to use "sans plumb" gasoline in our new unleaded gasoline car) and staring at the beautiful St. Lawrence River from the heights of the Citadel, having a great time at Canada's Wonderland amusement park, visiting the Canadian side of Niagara Falls and driving to Niagara-by-the-Lake (and eating luscious cherries direct from the orchard on the way). I fell in love with Canada quite early in my life and regret I don't live close enough any longer to make trips there. Some of my favorite television series have even come from Canada, like the spooky soap Strange Paradise, Doctor Simon Locke (filmed in Kleinberg, Ontario), the fun kids' series The Forest Rangers, Kevin Sullivan's Anne of Green Gables and its sequel, and of course the modern Murdoch Mysteries! (Plus the first two Addie Mills' specials were filmed with Ontario standing in for Nebraska.)

Since I already had a book to read for July, instead of celebrating Canada Day, I'm here celebrating Victoria Day (May 21) instead with some Canadian-style Christmas books.

Christmas in Canada, by the editors of World Book
This entry in the World Book Encyclopedia "Christmas in..." volumes will put you in a holiday mood immediately, with its cover of the glowing Citadel overlooking the old city of Quebec, and following with an introductory chapter on "Christmas Lights Across Canada," the first Thursday of December when each city in the country turns on its holiday displays with the capital of Ottawa leading the way. Since the first explorers of Canada were French, French customs, like réveillon and Pere Noёl are discussed first, then following in close order are British customs (which from the majority of Canada's national customs derive), German, First Nations tribes that were converted by the French, and Ukrainians who settled the Canadian plains, and who celebrate their Christmas and Twelfth Night in January, based on the Julian calendar. Of course, each province has its own customs: for instance Newfoundlanders still practice mumming, Ukrainian families' celebrations featured a sheaf of wheat called the didukh which represents the family, Inuits hold contests and snowmobile races, "belsnicklers" still roam in Nova Scotia, and everyone enjoys the Santa Claus Parade from Toronto, originated by the now-defunct Eatons Department Store.

Color photos and illustrations illustrate all these customs, and two crafts, recipes, and two traditional Canadian carols, including "The Huron Carol," are included in this volume.

A Pioneer Christmas: Celebrating in the Backwoods in 1841, Barbara Greenwood, illustrations by Heather Collins
This is a sequel to Greenwood's classic A Pioneer Story (A Pioneer Sampler in the U.S.) about the Robertson family, a family of Scots descent who live in the Canadian backwoods in the 1840s, in which the simple, liberally-illustrated family story is broken between chapters to provide projects for young readers and also facts about the historic events behind the story. Once again middle child Sarah (the family consists also of the Robertson parents, older siblings Meg and George, middle brother Willie, little Lizzie, and baby Tommy, plus Granny Robertson) is the focal character as she participates in simple Christmas preparations (helping stone the raisins for the plum pudding, knitting gifts, making pine branches into garlands and pomander balls, and also preparing for the visit of her cousins Andrew and Sophie, who are expecting a baby. But will the snow make the visit impossible? The family also participates in a school exhibition and a "Christmas frolic" where dancing and music are held.

A plum pudding recipe and also one for permanent cookie decorations, plus instructions for making a pomander apple and other typical pioneer gifts are included. A nice peek back into when Christmas was a simpler holiday! I also applaud the illustrator for putting little Tommy in a dress as all small children would have worn in those days!

Christmas With Anne and Other Holiday Stories, L.M. Montgomery
This is a sweet collection of seasonal short stories written by Montgomery for magazines between 1899 and 1910, plus two Christmas chapters from the Anne books: Anne's gift of the dress with puffed sleeves during her first Christmas at Green Gables, and Katharine Brooke's eventful stay at Green Gables from Anne of Windy Poplars. They are not "great art," just gentle, happy little stories about ordinary people overcoming obstacles and celebrating a merry Christmas (or New Year's, as in several stories) even if in just the simplest manner. Several stories are about families reuniting accidentally after years of feuding; others are about wealthy protagonists deciding to help less fortunate neighbors. In one tale an old-fashioned aunt deplored by her niece provides a merry Christmas when the unexpected happens, in another a group of wealthy children bored by Christmas instead do something nice for a struggling family, in a third travelers stopping by a farmhouse inadvertently provide a happy holiday.

Best read with a cup of hot tea or cocoa, with a pet snuggling on your lap whilst listening to Christmas music. (Afghans and fireplaces also work. 😊 )
Jotted down with a jingle by Linda at 1:09:00 AM 0 comments