"Instructions on Not Giving Up"
Ada Limón, 1976 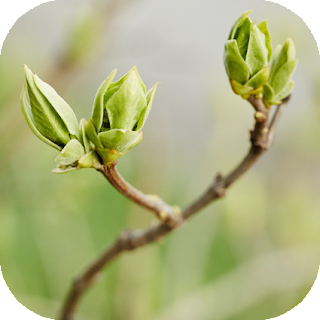 More than the fuchsia funnels breaking out
of the crabapple tree, more than the neighbor’s
almost obscene display of cherry limbs shoving
their cotton candy-colored blossoms to the slate
sky of Spring rains, it’s the greening of the trees
that really gets to me. When all the shock of white
and taffy, the world’s baubles and trinkets, leave
the pavement strewn with the confetti of aftermath,
the leaves come. Patient, plodding, a green skin
growing over whatever winter did to us, a return
to the strange idea of continuous living despite
the mess of us, the hurt, the empty. Fine then,
I’ll take it, the tree seems to say, a new slick leaf
unfurling like a fist to an open palm, I’ll take it all.
Jotted down with a jingle by Linda at 1:21:00 AM 0 comments

Isn't this lovely? It reminds me of the little saints' cards and saints' books we used to get in the 1960s and 70s. 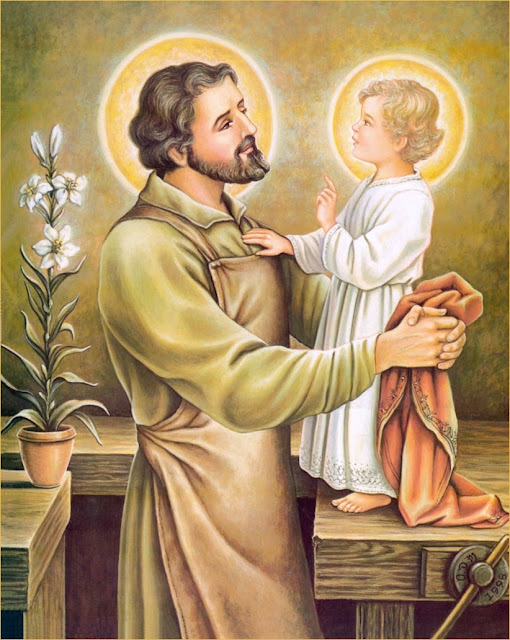 Once every month or so, we would take a ride to Fall River, MA, to go to Saint Anne's Church. In those days the church dominated the town; you could see it on your right as you drove south and east on I-195 and crossed the Braga Bridge over the Taunton River. We'd get off at the first exit and drive through a little warren of triple deckers and tenement houses, relics of the days when Fall River was a mill town, and turn on South Main Street, only to have the landscape open up with the park at our right and the big church on our left. In those days you could park right out front, across the street, and look at the magnificent structure; the original Catholics in Fall River were French, and the church was built in homage of Sainte-Anne-de-Beaupre in Quebec City. Upstairs the sanctuary looked like a little cathedral, with smaller chapels in the rear. Mother would patiently go from chapel to chapel and light a candle at each and pray for her family and Dad's family and anyone else who was ill. No matter what the season the church was always quiet, dark and so peaceful. The old wood in the church—the pews, the confessional booths, the other seats—were worn smooth, and it smelled of candle wax and incense.

Downstairs there was a second sanctuary which was eventually fixed up with pews, but originally had folding chairs. In the corner was a big pile of mostly wooden but some metal crutches, some of them ancient. These were the implements of dozens of people who had come to the church praying to be cured—and they were. Like the sick man who rose from his pallet, they walked unaided for the first time in years. It was awe-inspiring.

There was also a little antechamber downstairs where a priest was always seated in the office. Mom would go in to speak with him to have a Mass said for her parents or someone else, and I would look at the little booklets and tracts in metal racks outside his door. (The church used to have a little shop, but it closed back in the 60s.) Some of the little booklets were for children, and some were of the saints, called Miniature Stories of the Saints. I had four of them; there was a story about the saint on the left side and a picture of the saint on the right, and they would be similar to this. Even when the story of the saint was something horrible, like St. Sebastian being pierced with arrows or St. Andrew hung on a cross upside down or St. Catherine tied to her wheel, the picture could always make you believe that person went straight to sit by God when they were martyred. It was comforting.

St. Joseph had to be an exceptional man. Think about it, you are to be married and then discover your fiance is pregnant. You love her, and then you realize "Oh, she must have cheated on me!" How that must have hurt! And then she tells you this incredible story, about an angel! Preposterous! Angels don't come to speak to working people like us, they are for the high priests and the mighty. Of course he doubted her—until the angel found him as well. So he brought up this unusual boy like his own son, taught Him a craft, took Him to Jerusalem like a good parent of those days would. I wonder if Joseph was dismayed at twelve-year-old Jesus talking with the temple elders, his excuse being He was doing His Father's work. Aren't I his father? But from all indications Joseph understood.

He died before Jesus fulfilled his destiny.

(I just found out Ste. Anne's closed last year. They celebrated their last Mass on the final Sunday of the liturgical year, November 25, 2018. Apparently the church was in disrepair and the diocese of Fall River has no money to fix it. I am very sad.)

Will you tell me how on earth it is March already? The days fly by since I've retired, even when all I'm doing is listening to podcasts while cleaning house. It's 3:30 already as I write this and I haven't even vacuumed yet.

February was a full month, thankfully without disasters. James did have one doctor's appointment and next week must have a skin cancer removed through a MOHS procedure. We are crossing our fingers about this. Mostly we have watched the weather get warmer and warmer (it was high 60s some days and a couple of low 70s, too) and the trees starting to bud, and the blossoms everywhere: the Bradford pear trees have already turned to white snowballs and are leafing out, and the flowering cherries and plums are bright pink and purple, and the yellow blaze of forsythia here and daffodils there is quite daunting. The purple and white magnolia tree up the street has not only bloomed but is already scattering petals to the strong wind. Ironically we are having another cold front this week—well, until the weekend, when it will go back to 60s, but then it will rain. It seems that it has done nothing but rain, and it always rains on the weekend. We had a cloudy but dry day on Saturday, but had to race a rainstorm home yesterday (and south of here the storms swarmed angrily and formed tornadoes). I'm not sure why everyone wants spring so badly when all it does is make us sneeze and brings alive the threat of tornado sirens heralding disaster.

I didn't even get a Rudolph Day post done for February (I was reading Emlyn Williams' Southern Christmas which is full of the flower blooms that are traditional of southern holiday decorations, perfect for the springing of spring, but I never finished it), it zipped by that quickly. It's almost time for this blog to go semi-dormant. Heck, next Sunday is the annual travesty of turning the clocks forward, which drives me bonkers. All winter when he's gone to work James has had to use the floodlights on the driveway to be able to see when he mounts the power chair on the truck. Now that it's finally light enough in the morning for him to see without the lights, we're going to push the dang clock forward an hour, meaning it will be pitch dark at seven in the morning again. The sun won't rise until almost eight, which is stupid.

I pray for a happy March.