I've had an Easter tree (photo here) for some years, purchased when Michael's originally started selling them over a half-dozen years ago. As you can see, it's a very basic Easter tree, with spare white, straight branches. The support block, which is also white, I've always buried under Easter grass as shown.

This year Michael's has a "hipped-up" Easter tree which I've been looking at with some envy. The ends of its white branches are curled and it has leaves and tiny flowers wound around its stem. I considered buying it, but it's so overly decorated that I thought it would take away from the cute little Easter tree ornaments that I've bought over time. I wanted a bit of an update, not a major overhaul.

So that's what I've been doing this afternoon.

First I found Mom's old looping pliers that she used for her jewelry work. She always bought her own tools because the pliers and things they provided at Tesoro didn't always fit her hands. I curled the end of each branch in a C-shape and then, on the longer branches, I also put little coils in them, one on the shorter of the long branches, a double coil on the very longest branches.

Then I dug out my embroidery threads and pulled about eighteen inches off each of these colors: lavender, pale blue, spring green, a bright pink, and yellow. I separated them out to two threads each and then took turns winding the colored threads around the trunk as you would do with ribbons on a maypole. I tied them at the top and then used a bit of tape to secure them at the bottom.

I'm presently waiting for the pale blue that I painted the base to dry. When it is dry, I will put on another coat, and then sprinkle on the pink, yellow, purple, and green glitter that I got in a $1 glitter kit at JoAnn.
Jotted down with a jingle by Linda at 5:46:00 PM 0 comments

The Zeppoles Have It

I supposed it's not right of a good Italian to confess it :-), but I never much cared for zeppoles, at least for the filling, as I've never been a yellow cream fan. Used to drive my mom crazy by eating the pastry shell and the whipped cream on top, and surreptitiously consigning most of the yellow cream to the garbage pail on the counter. She eventually quit buying me my own zeppole on St. Joseph's Day and just bought one for her and one for Dad, and I had a chocolate doughnut (chocolate-frosted, not all chocolate) or an apple turnover.

(I used to do this with apple pie, too, since apple pie filling is always wayyyyyy too sweet. I'd eat the crust and a few of the apples and give the rest to my mom or dad. Apple turnovers were okay because they had a small quantity of apples compared to the crust. I remember how happy I was to find "no sugar added" apple pies...until Splenda arrived. Now most of the "no sugar added" apple pies we find have sorbitol or malitol in them. Guys, the apples are already sweet; why is God's name do you have to add so much sweetener? I might as well spoon sugar out of the bowl and eat it directly, some of these pies are so sweet.)

Anyway, the author in the article linked above is writing about Wright's Dairy Farm in North Smithfield, which I first wrote about in this entry.
Jotted down with a jingle by Linda at 11:33:00 AM 0 comments

A week from Monday is St. Joseph's Day, and I thought I would get up a small St. Joseph's Day table or altar. These are usually large, elaborate affairs, mostly in churches, but sometimes in people's homes. Here's one in New Orleans.

Mine's a tad bit smaller. LOL. I bought the little statue at the Monastery of the Holy Spirit in Conyers, GA. I didn't want a white statue, but I liked the way this St. Joseph looked, strong, like a carpenter should. The brother working at the counter even blessed him for me. I found something to place him upon and covered it with a tatted piece my mother did many years ago. Around him are traditional fruits, including figs and olives on the right. I wanted to get an artificial roll, too, since breads are a big part of the display, but the only "fake bread" I could find was a too-huge loaf at Michael's.

The nuts in front, on the other hand, are real filberts and almonds. 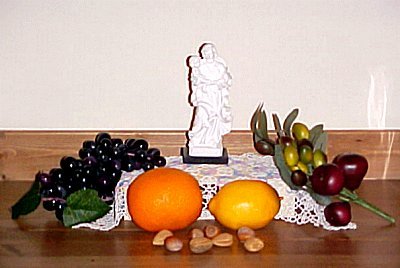 James' friend Rusty, at the hobby store, paints figures quite beautifully; he did a St. Jude statue for me many years ago. I am thinking of letting him paint this, too. Maybe I can find some artificial breads and nuts some other time.
Jotted down with a jingle by Linda at 11:33:00 PM 2 comments