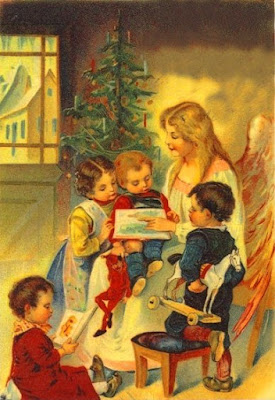 Stories have always been part of Christmas. The most enduring one has been the story of the Christ Child; for His followers this is a sacred truth. But over the years other stories have been engendered by the holiday season: the "scary ghost stories" told around the fire of old, the most popular being Charles Dickens' classic A Christmas Carol; legends of King Arthur and knights celebrating medieval feasting; fantasy tales of elves and spirits; true tales of sad Christmases and miracles on Christmas Eve and unexpected truces during times of war; simple celebrations and fabulous wealthy feasts; stories of giving and tales of hope, stories of faith and narratives that are just plain fun. In modern times we have had media stories: Rudolph the Red-Nosed Reindeer, A Charlie Brown Christmas, and all their compatriots who now find themselves classics, and there are even famous radio stories, like "The Small One" and "The Cinnamon Bear."

There may be stories out there you've never heard before, too. Have you read "The Fir-Tree Cousins"? Try searching the web for "vintage Christmas stories"—there are at least a dozen by Anne of Green Gables author Lucy Maud Montgomery alone.

And of course who could forget O. Henry's "Gift of the Magi"?

However, there are so many Christmas story collections that just repeat the classics—most of these books which I have already picked up—that I was surprised to discover Keeping Christmas: The Celebration of an American Holiday by Philip Reed Rulon and find some novelties therein. This volume is a combination of fiction and nonfiction, but all of it having to do with different ways of spending Christmas in the United States. There are a few of the usual suspects, but still favorites: Stowe's "Christmas, or the Good Fairy" about a discontented rich girl who finds much better gifts by giving something away, and Truman Capote's melancholy "A Christmas Memory," bringing alive the friendship between an elderly woman and a small boy and the enduring Western "Stubby Pringle's Christmas." There is also a Nathaniel Hawthorne offering, "The Christmas Banquet," which is at once lugubrious and pointed.

Some of the historical texts are interesting to read, including an account of Columbus' first Christmas in the "New" World, an account of Christmas at Sutter's Fort before the gold rush of 1849 at which Johann Sutter makes a prophetic statement, accounts from Robert E. Lee and other Civil War soldiers, and two different accounts of Native Americans encountering Christmas customs (the second of these, "How the Indians Spend Christmas," may not be entirely politically correct today, but at many points is sympathetic with the Natives, who, if they have not yet been converted to Christianity, basically see Christmas as a day to eat themselves sick as they have seen the settlers doing, and, as one chief points out to the narrator, "Fort July" is just about white men getting drunk)!

Of novelty was finding Earl Hamner's "The Homecoming" included in this volume. I have the novella, so I am not sure if the shorter version included here is the original version which was later expanded or if it were trimmed to fit. Its roots to The Waltons are mentioned and one can definitely see them here. Another surprise is the 1844 "Santa Claus, or The Merry King of Christmas," which can be described as a Boston-set cross between "A Visit from St. Nicholas," L. Frank Baum's Life and Adventures of Santa Claus, and A Christmas Carol/"Christmas, or the Good Fairy" appeal for charity, where diminutive Santa, his team of reindeer, and hordes of fairies emerge from the Old Oak on the Boston Common and determine to make it a merrier Christmas for the poor. "Christmas in a Country Doctor's Home" is another fun story, about preparations for the holiday in that family and of the daughter's wish for her father to have no babies to deliver on Christmas Day so they can have their frolic. There's a sweet story about a Christmas tree seller and an amusing effort by Alexander Woollcott, and yet this stocking is not yet plumbed.

This is an interesting little volume with much to recommend it. If you see it in a used book store, you may wish to pick it up!
Jotted down with a jingle by Linda at 12:27:00 AM 0 comments