George Washington and All That

George Washington still remains a mythic figure in our history, despite at least a century of debunking books after the idyllic Victorian chroniclers. But even through the fifties this charming little fable about George Washington bravely owning up to a childhood misdeed was taught either in history classes or featured in readers:

Of course only a moral fable concocted by a minister, but cherry trees are still associated with Washington (and the capitol city named for him, hence the flowering cherry trees in the District of Columbia today) and cherry pie and tart recipes flourish on Washington's birthday.

Alistair Cooke says in America that many historians have had a hard time finding warmth in the man. As many aristocrats of his time, Washington was strictly brought up to observe propriety at all time. He disliked being touched and asked that official visitors remain standing in his presence. (Cooke adds that someone, observing this, commented, "I fear we have exchanged George III for George I.")

Still, we have bits of things, like a list of toys he ordered for his stepchildren (supposedly as Christmas gifts), that makes him seem a little more than a legend from on high.

On the other hand, I remember George being "humanized" from my childhood. I hear stories from friends about cute little songs they learned in their childhood, like "Wheels on the Bus." Most of what I listened to as a kid, besides the odd record like my old 78 RPM of "Happy Trails" and "Red River Valley" by Roy Rogers and the Sons of the Pioneers, were either Italian songs or songs by Italian singers (Perry Como, Dean Martin, Jerry Vale, Al Martino; Enzio Pinza—all except Frank Sinatra; Dad liked him but Mom hated him). (I did have the 45 of "PT-109," but remember, I was Catholic; John F. Kennedy was big at our house, too.)

My favorite Italian singer was a man who sang "novelty songs," Lou Monte. I had several Lou Monte 45s (still do, in fact), including his big comic hit "Pepino the Italian Mouse." This was one of my favorite records, about a man who has a persistent, gourmet mouse in his house, who steals his cheese, drinks his wine, and scares his girlfriend.

But I also loved the song on the flip side, which is the bouncy "What Did Washington Say (When He Crossed the Delaware)?" I still adore this song; it's funny!

(I looked up Lou Monte on Google today and found a Wikipedia entry, which left me absolutely gobsmacked: apparently Monte has been labeled as "controversial" in some circles. The quote in Wiki: "Monte's works have been considered by some to be degrading to both Italian-Americans and to Italians generally, as they portray Italy and Italians as backward, simple, and servile. We Got Teeth magazine writer Dom Passantino assembled a staff pick of 'The Top Ten Worst Ambassadors of Italian Culture Via Song,' in which Monte was labeled, 'the Italian Stepin Fetchit.'"

Anyway, I found the lyrics for "What Did Washington Say" on mudcat.org; thanks to Jim Dixon and "Ferrara" who did the transcription:

"Give me liberty or give me death"--these words will never die,
"We have just begun to fight" is a famous battle cry;
But what I really want to know ain't written anywhere:
Hey, what did Washington say when he crossed the Delaware?

(Mom told me this translated roughly as

"Martha baked these pizza pies and now they're cold as ice;
We'll sell them to the Indians at only half the price.
Please row a little faster, boys. I got no time to kill--
Tonight I'm posing for my picture on the dollar bill.

"George stood up and told his men, "Keep rowing, please don't stop.
These boats are only rented and we've got till six o'clock.
It's against the rules; we can't go rowing after dark.
We've got to get these rowboats back to good old Central Park.

"On the day of glory, that's what Georgie told his crew.
Some may doubt the story, but to those of you who do,
Just ask Giusepp' the barber while he trims and cuts your hair--
He'll tell you just what Georgie said when he crossed the Delaware:

After the furor of mardi gras, this is a quiet day. It's appropriate weather here, too, as grey as the ashes and raining steadily. Every once in a while there is a rumble of thunder. Willow, her eyes big, retreats into her crate: "The sky is growling at me!" Pidge chirps back or coos to Girlfriend: "I'm not afraid of that ol' sky."

The BBC's Page on Ash Wednesday

I remember going to St. Mary's every Ash Wednesday.The old walls of the church smelled strongly of incense. People bundled in winter coats trailed to the altar and then back. Mostly women but some men said rosaries after receiving their ashes. Some children were taken to Mass before school and came in with the mark of ashes on their foreheads. We went after work because Daddy left for work too early to go to church, but was home by 4 p.m. By then the sun was low in the sky and the old church was dim, with the banks of votive candles a flickeringly bright oasis around the altar.
Jotted down with a jingle by Linda at 10:01:00 AM 0 comments 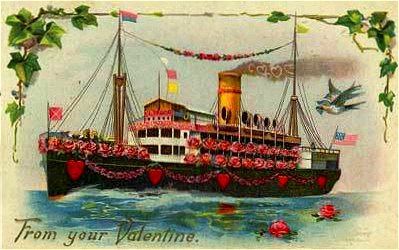 The Day the Birds Choose Their Mates

And James plots something...I'm not sure what. I've just been told to keep my plate clear tomorrow night. :-)

More Than One St. Valentine

Who Keeps the Good Saint's Remains?

Valentine's Day Around the World

Among the more gruesome things having to do with Valentine's Day is the infamous "St. Valentine's Day Massacre" so celebrated in gangster history. Here's a page at Weird and Haunted Chicago that talks about the events and the places.
Jotted down with a jingle by Linda at 3:08:00 PM 0 comments

When Shadows Mean Something

February 2 lies halfway between the winter solstice and the spring equinox. Pagan societies celebrated this day as Imbolc, a time when the days were getting longer and winter was beginning to release its hold. Many hibernating animals emerged from shelter during this time of year. Christian societies call the day "Candlemas." It celebrates the purification of Mary, mother of Jesus, 40 days after his birth, as was tradition at that time. On that day all the church candles are blessed for the year. (Candlemas is also the day for you to remove any Christmas greens you have left, since it is considered bad luck to keep them displayed any longer—perhaps because they were so dried up by that time!)

The "seeing of shadows" custom comes from beliefs expressed in various rhymes:

"If Candlemas Day is bright and clear, there'll be two winters in the year."

"If Candlemas be fair and bright,
Winter has another flight.
If Candlemas brings clouds and rain,
Winter will not come again."

Basically, if the sun shines on February 2, it's only a brief respite before winter closes back in. But if it's a grey or rainy day, winter is still working its way through, but spring should follow soon after.

In Germany badgers and hedgehogs traditionally "saw their shadows"; in the New World the ubiquitious groundhog, a.k.a. the woodchuck, a member of the marmot family, gained the honor.

The "official" groundhog of the United States is Punxsatawney Phil, the Pennsylvania groundhog who found even more fame with the release of the Bill Murray film, Groundhog Day. Phil's official website:

The Official Site of the Punxsutawney Groundhog Club

There's even a Canadian groundhog, who is unusual because he's an albino: here's Wiarton Willie's Website.

This CBC article reveals a little secret about Willie!

Lore, poetry, recipes and more for Imbolc.
Jotted down with a jingle by Linda at 12:03:00 AM 0 comments