Only two months until Christmas! Fall is flying by as usual, while stinky, soppy, sullen, searing summer takes its own sweet time slouching toward Hades to die a welcome death and bring us autumn. 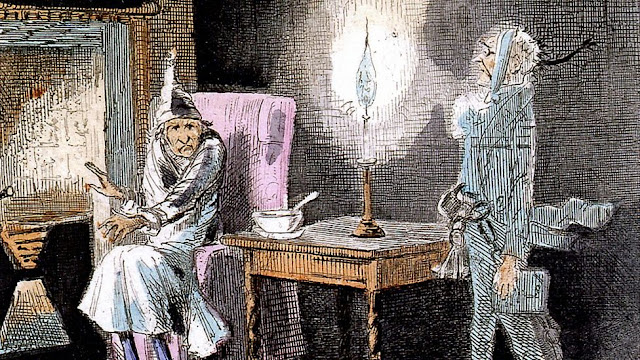 I've been having a Dickens of an autumn: literally! Netgalley presented me with two different books about Dickens and Christmas, and I approached them both with anticipation. Well, one out of two wasn't bad.

Dickens and Christmas, Lucinda Hawksley
"There is a strangely prevalent belief that the British did not celebrate Christmas in any memorable way until ... the arrival of Charles Dickens' Christmas Books. Contemporary accounts ... show this to be untrue."

There are several new media about Charles Dickens and Christmas out this year, this one and a fiction entrée, as well as a film called The Man Who Invented Christmas. I'm not certain why, as it doesn't appear to be a Dickens' anniversary of any kind, unless we are considering the 180th anniversary of Oliver Twist. But it's our gain. This book is the nonfiction entry of the two, and is literally what the title states: Christmas celebrations over the years during Charles Dickens' lifetime, starting with how Christmas would have been celebrated when Charles was a boy (greenery in the home, great feasting on a Christmas porridge, gifts—but more commonly gifts at New Year—and a big cake and an even larger celebration on Twelfth Night that included a cake which has now been transferred to the Christmas festivities). The writing of Dickens' "Christmas Books" (some not taking place at Christmas at all, but just called that because the books were intended as Christmas gifts) and his celebrations with his family follow, with festive food and plays put on by Dickens and his children.

As with any family, the Christmases were not always merry. One year the Dickens' oldest child was very ill. Later Dickens and his wife separated as he carried on an affair with young actress Ellen Ternan, and the plays and feasts came to an end. Dickens spent his last few years doing readings of his work and pretty much working himself to death.

I enjoyed reading about how the family celebrated Christmas and how Christmas celebrations changed over the years, but it was also sad how Dickens' bright youthfulness turned sour and his family life collapsed. The book is liberally illustrated with period etchings and woodcuts.

Mr. Dickens and His Carol, Samantha Silva
I must be the only one who's read this book so far (having read some other reviews of it on Goodreads) who really wasn't charmed by it.

This is a fictionalized story about how Charles Dickens came to write A Christmas Carol. Things are not going well for Dickens as the year 1843 comes to a close. His novel Martin Chuzzlewit has not been well received, especially in the United States, since Dickens lampooned some of the "characters" he met on his American tours in the book. His publishers are asking for a Christmas book, but he has not one idea in his head about what to write. The family's extravagant spending has caught up with them; he still fears ending up in debtors' prison as his father did, and his improvident father is still charging his own expenses to his son's account, so the author begins lashing out at every expenditure made, even though weeks earlier he would have approved of them. And then Dickens compounds his problem by meeting up briefly with an old flame; when his wife hears about it, she packs up the children, Dickens' annual partners in the family's wonderful Christmas festivities, and leaves for Scotland.

A sober Dickens moves back to his old digs where he wrote The Pickwick Papers, and amazingly, finds a muse: a beautiful woman in a purple cloak who works at the theater where his friend performs. As he tries to track her down, he encounters situations that will later make its way into his writing—but can he write his Christmas book to pay his bills, and somehow make amends to wife Catherine in the meantime?

Author Silva actually apologizes in the afterward for creating a fictional situation around Dickens' writing of the book, saying that she loved Dickens so much she wanted to create an adventure around him. Honestly, I have to admire a lot of this novel. I love the way she uses Victorian language to describe situations: Dickens' hyperactive household (although she has the Dickens' kids playing with rubber bands in his study, two years before they were invented), the streets of London, the warrens of the poorest areas, the world of the theater. She also works into the story Dickens' habit of remembering unusual names and incorporating them into his tales. It's just that I figured out the secret behind Dickens' muse almost immediately and then became irritated as he tried endlessly to make contact with her. And then he writes another book before he even tackles the Carol? In the end it seemed overwrought and endless.

Here's a great BBC article about the actual writing of A Christmas Carol.

Of course, if Christmas preparations in August and Christmas carols in October incense you, you may enjoy this a bit more:

Bah, Humbug! Grumping Through the Season, gathered by William Cole
This funny little gift book is for your favorite pre-Carol Scrooge, with witty sayings and essays about the excesses of the holiday season. From Hilaire Belloc's terse Christmas card verse, "May all my enemies go to hell, Noёl, Noёl, Noёl, Noёl," to sour essays by luminaries like Roald Dahl and George Bernard Shaw, down to James Thurber's dour version of "A Visit from St. Nicholas" as written by Ernest Hemingway, it's the perfect gift for anyone who objects to Christmas trees appearing in craft shops in July, endless Christmas carols at the mall the minute Hallowe'en is ended, and the arguments for and against Black Friday's screaming approval of excess.
Jotted down with a jingle by Linda at 1:40:00 AM 0 comments

Mrs. Claus: Not the Fairy Tale They Say, edited by Rhonda Parrish

Santa Claus' wife: she's the plump white lady who bakes cookies for the elves, right? Homebody. Mistress of the kitchen, the lady who spoils the reindeer.

Not in this book! In fourteen imaginative short stories, Mrs. Claus is a valkyrja, a goblin fighter, a being from another planet, a member of the Fae, a witch; she detects, can repel North Pole invaders, pilot an airship, visit alien worlds, stalk monsters who kill reindeer —and in one story she's even evil! I loved every one of the concepts except for one, and the whole idea of Mrs. Claus not conforming to the standard housekeeping stereotype and having a talent separate from Santa, who is also portrayed in various nontypical ways, including being a woman.

Some of my favorites in this volume: "Wight Christmas," the spooky "The Asylum Musicale," "Christmas Magic," "Unexpected Guests," "Shouldering the Burden," "Captain Lizzy and the Stranger in the Fog," and "Red to Hide the Blood."

If you love Christmas, fantasy tales, and strong female characters, this one's a triple threat of delight! You'll never see Mrs. Claus and her wooden spoon and frilly clothes in the same way again.
Jotted down with a jingle by Linda at 2:53:00 PM 0 comments 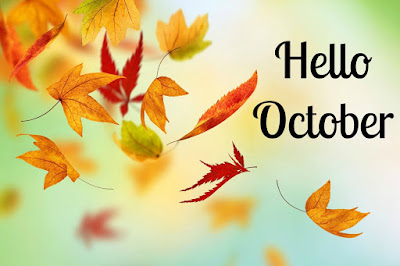 by Grace Strickler Dawson
("St. Nicholas," October 1929)
With an artist's eye
For color and line
And delicate grace
In a new design,
She fashions her gowns
With care, with care,
And saunters by
With a casual air--
Who but October
Would think to wear
Old bronze lace
On a pale jade sky?
Jotted down with a jingle by Linda at 9:50:00 PM 0 comments