For Love of Language and Christmas

A Book of Christmas, William Sansom
I found this book in a very funny way. I was just finishing the book Christmas in Pennsylvania and reading the bibliography. The author states that probably the best book he knows about Christmas was William Sansom's Book of Christmas, and I thought to myself that I should look it up sometime. A few days later I went by Atlanta Vintage Books on my way home from work. They only have their Christmas books out at Christmastime, and since December was upon us I hoped they had their small supply available. I was rewarded by a small stack of books on top of a small stool.

There on top was A Book of Christmas. It could have only been fate.

Oh, and Christmas in Pennsylvania was quite correct. This is a wonderful book. I have other histories (or "biographies") of Christmas, but Sansom's is told with delightful language—his opening paragraphs alone are poetic:

What is the colour of Christmas?
Red? The red of toyshops on a dark winter's afternoon, of Father Christmas and the robin's breast?
Or green? Green of holly and spruce and mistletoe in the house, dark shadow of summer in leafless winter?
One might plainly add a romance of white, fields of frost and snow; thus white, green, red—reducing the event to the level of a Chianti bottle.
But many will say that the significant colour is gold, gold of fire and treasure, of light in the winter dark; and this gets closer.
For the true colour of Christmas is black.
Black of winter, black of night, black of frost and of the east wind, black dangerous shadows beyond the firelight.
Darkness of the time of year hovers everywhere, there is no brightness of Christ Child, angel, holly, or toy without a dark surround somewhere about. The table yellow with electric light, the fire by which stories are told, the bright spangle of the tree—they all blaze out of shadow and out of a darkness of winter. The only exception is an expectation of Christmas morning, the optimistic image of sunlight on the snow of Christmas Day and a sparkling brisk walk through the white-breath frosty air. But it only lasts a short while, and has its own dark frame, made up of the night before and the early dark of a December afternoon.

The twelve chapters (with header drawings from "The 12 Days of Christmas") cover the spectrum of the celebrations: sacred celebrations, feasting, Christmas music, plays, literature, giftgivers, etc. in pages crammed with color and black and white illustrations, photographs, woodcuts, and engravings. Any Christmas lover should enjoy Sansom's tale-spinning of pantomimes, Krampuses, holly bushes, vintage decorations, "Merrie Olde England," sacred art, and all the trappings that herald Christmas.
Jotted down with a jingle by Linda at 11:51:00 PM 0 comments

"Old Christmas" from the Source

December 25th: The Joys of Christmas Past, Phillip Snyder
When Snyder set out to do a book on antique Christmas ornaments, he found himself reading nineteenth-century newspapers on microfilm, chiefly from New York City. He was so enchanted by the reports of Christmas celebrations that he continued reading and came up with this book, designed to take you "way back when" to see how the holidays (and they were called that, even back then, because the custom was originally to give gifts at New Year) were celebrated.

Incorporating the words and descriptions of the unnamed reporters of the day, supplemented by a five-page bibliography and a dozen magazine articles, we discover the sights, sounds, and smells of the Christmas food markets in Victorian-era New York City and discover what prodigious feasts those who could afford them had; read about the racket that used to greet Christmas day, whether it be small boys with horns or men pounding gunpowder on anvils; the sheer fatigue of the overworked store clerks, delivery boys, elevator operators and other sales employees in the days when stores stayed open through midnight on Christmas Eve; the experience of a sleigh ride one snowy Christmas; the unfortunate drunkenness that accompanied Christmas celebrations; the first department store Santa Claus (and where that jolly old persona came from); and more, from Christmas trees to live evergreen roping to sacred music to the delightful experience of an elderly man "taking a slide" one Yuletide night.

Snyder takes care that the experiences sound as first hand as possible, taking his narrative directly from the newspaper reports, which gives you a "first hand" appearance that most histories of Christmas do not. In addition, the book contains old illustrations and woodcuts from newspapers and the reference books to enhance the experience (the development of the "look" of Santa Claus, street scenes, market scenes, etc.). If you're at all interested in the history of American Christmas celebrations (or non-celebrations, as in Puritan-influenced New England), you will enjoy this book!
Jotted down with a jingle by Linda at 3:46:00 PM 0 comments

Not As Old As You Think

Christmas: A Biography, Judith Flanders
Flanders, who's previously described the Victorian home and the Victorian city in her immensely readable books, tackles the story of Christmas in this newest volume. She opens by reminding us that Christmas is a very different holiday depending on where you celebrate it, and everyone believes their Christmas customs are the authentic ones, when nothing could be further from the truth.

For instance, there is a notion that Christmas was "more religious" in the past, yet most of the writing about Christmas in the "goode olde dayes" is about eating and drinking. Texts from the year 389 and in the seventh century had clergy complaining about feasting, drunkenness, and gluttony. Indeed, for the first few hundred years, it was unthinkable to celebrate Christ's birth, as if he was "some pagan god." The date of Christmas was fixed on December 25 to coincide with existing celebrations (the Kalends, Saturnalia, Mithras's birth, Yule) and many pagan symbols were given Christian symbolism (Christmas trees from the "everlasting life" of the evergreen, holly standing in for the crown of thorns, etc.).

Flanders also discusses how "traditional" Christmas celebrations were said to come from the "days long ago" when some of them were only several decades old, how businesses were open on Christmas (so people could buy Christmas food and drink) until very recently, how those wonderful old country house celebrations you hear about (like Christmas at Downton Abbey) required a great deal of drudgery, dirt, and loss of sleep for the servants despite their being tales of revelry among the staff, and how Christmas advertising goes back to the 18th century and that people at the turn of the last century were already complaining about Christmas commercialization (and how wealthy young ladies already bemoaned the fact that their friends got more Christmas gifts than they did).

There are more detailed books about the "biography" of Christmas (which Flanders notes in her bibliography), but this is a great summary of all of the truths and the fallacies about the holiday season. Flanders even provides little icons in the margins to indicate which subjects she is discussing (a horn for music, a mask for revelry, a Santa face for the history of gift givers, etc.).
Jotted down with a jingle by Linda at 11:49:00 PM 0 comments 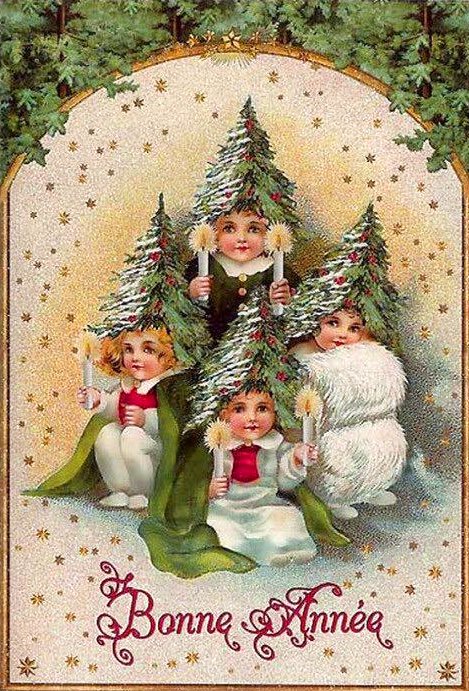