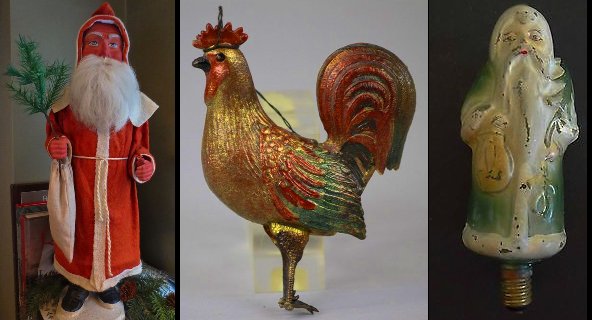 Here we are already at "Leon Day" ("Noel" spelt backwards)! The new year is fast becoming the old year, as time spins its inexorable thread. One hundred years ago, the items you see above were common Christmas decorations. The Santa Claus on the left is called a "belsnickel," a tradition among the Pennsylvania Germans, and is also a candy container. Many other designs of candy containers existed: reindeer, snowmen, sleighs. This belsnickel not only carries a sack for gifts, but, as in German tradition der Weihnachtsmann brings the Christmas tree, a little fir tree.

The Santa on the right is one of many "figural" electric Christmas bulbs that were popular in the early 20th century. They came in various Christmasy themes, but also in the shape of animals and fruits, and in media shapes like Snow White and the seven dwarves, Mickey Mouse and Donald Duck and Pluto, and even comic strip figures like Felix the Cat and Spark Plug the horse from "Barney Google."

The beautiful ornament in the middle is called a "Dresden," because they were made in Dresden, Germany, the home of so many beautiful Christmas ornaments. Although they look metallic, Dresdens were actually made of cardboard. Wet cardboard was pressed into a detailed mold, one sheet for each side of the ornament. When dry, the two pieces were glued together and then hand-painted. Some were of one color, perhaps silver, gold, bronze, others multicolor like this rooster, and sometimes trimmed with gold tinsel. They came in all sorts of designs: animals, fruits, vegetables, angels, small children, "Kriss Kringle," even airships and motorcars.

Deck the Halls: Treasures of Christmas Past, Robert M. Merck
If you like what you've seen so far, you'll probably love this thin 1992 volume of photos of all sorts of vintage Christmas ornaments taken from author Merck's private collection. This must have the largest collection of color photographs of figural bulbs that I've ever seen in one book (even Schiffer books).

Modern readers may find many of the Santa Claus figures a bit...stern. Even threatening. But these Santa figures were based on the original St. Nicholas, who, while fond of children, was still a disciplinarian. One hundred years ago children looked forward to his visit with as much fear as anticipation. In many households a man posing as Santa/Belsnickel/St. Nicholas would come to the door and question the children about their behavior during the year. We all hear the jokes about coal in your stocking, but what parent ever goes through with it? Back then they did—and naughty children often watched their brothers and sisters play with simple toys and dolls and eat candy (a rare thing in those days) while they had a handful of switches (thin tree branches) with which they would be whipped. Nor was Santa always in red. Victorian "scraps" show him in every color, even brown and gray.

Merck also shows off a small collection of ornaments made with cotton batting. These ornaments are rare because the white cotton dirtied easily in homes heated with coal and many still lit with gas and kerosene and were thrown out when they got grimy.

Pages 38 and 39 show off Merck's vintage tree, with Pennsylvania "Dutch" Putz below, to splendid advantage. A great used book find for the lover of vintage Christmas ornaments.
Jotted down with a jingle by Linda at 1:20:00 AM 0 comments 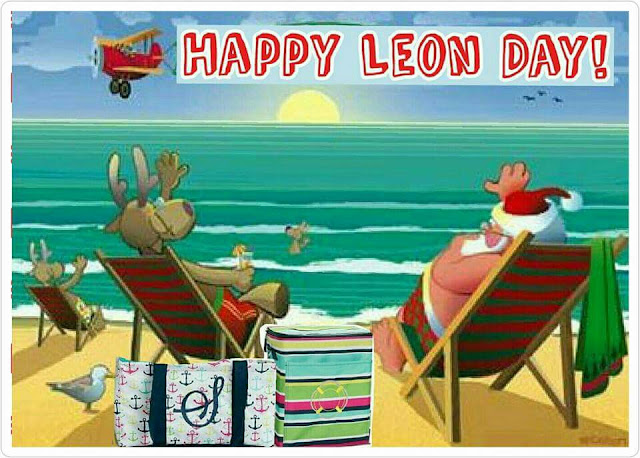