"Rudolph Day" is a way of keeping the Christmas spirit alive all year long. You can read a Christmas book, work on a Christmas craft project, listen to Christmas music or watch a Christmas movie. Once again, I'm reading a Christmas book (or, rather, books), this time for "Christmas in July." In fact, one of the books takes place during a "Christmas in July" celebration. All are cozy mysteries, and have a lot in common: they both take place in small towns where the industry revolves around Christmas, and involve local women who left home for bright lights in the big city, only to return home after romantic catastrophe to work in their hometowns.

Hark the Herald Angels Slay, Vicki Delany
This is the third, and I hope not the last, in Delany's "Year Round Christmas" Mystery series, set in the upstate New York town of Rudolph. I'll admit I was iffy about the first one, but Merry Wilkinson and her family and friends have grown on me. In this entry, it's Rudolph's annual "Christmas in July" celebration, and Merry, proprietor of the gift shop Mrs. Claus's Treasures, thinks her biggest problem is what to wear in the boat parade in which her father, who plays Santa Claus, will feature.

Then her ex-boyfriend Max walks back into her life. Merry used to live in New York City, working at the popular lifestyle magazine Jennifer's Lifestyle (think Country Living crossed with Bella Grace) and was engaged to Max until he dropped her for the new manager, Jennifer Johnstone's granddaughter Erica. Merry came home to Rudolph and is now happy running her shop and being in a developing relationship with woodworker Alan Anderson. She wants Max out of her life, but Jennifer's Lifestyle is planning to do a story on Rudolph, and spoiled Erica is part of the group.

A day later Merry runs back to her shop to pick up something she forgot, and finds Max strangled in her office, and her assistant Jackie missing. While Erica shrieks that Merry is the killer because Max "spurned" her, Detective Simmons makes Jackie the prime suspect, but Merry can't believe Jackie would do such a thing. So she'll have to prove her innocence.

I was pleasantly surprised by the story, which included a twist I wasn't expecting, even if it was a bit of a cliché. Even Merry's adolescent St. Bernard fits into the tale well, although he's portrayed by a Bernese Mountain Dog on the cover. If it is the last book in the series, it ended up in a good place.

Twas the Knife Before Christmas, Jacqueline Frost (and The Twelve Slays of Christmas)
I actually read the sequel to this "Christmas Tree Farm" mystery (Knife) before the first book. I'm not entirely sure if I would have read the second book if I'd read them in order.

In Twelve Slays, Holly White returned to her hometown of Mistletoe, Maine, from Portland after her fiancé dumped her fifteen days before their Christmas Eve wedding for a yoga instructor. Her parents run Reindeer Games, a four-generation Christmas tree farm, and Holly arrived home just in time for the annual Twelve Days of Reindeer Games events, and for everyone to be angry at Margaret Fenwick from the town Historical Society because she'd been badgering everyone to make the town comply to historical society parameters. The day before the Reindeer Games are to start, Margaret is found stabbed to death with one of the markers Bud White uses for his Christmas trees. New sheriff Evan Gray considers Holly's dad his prime suspect at first, and he's shut down Reindeer Games right before their biggest days of business a year. Holly feels the need to clear her dad and starts asking questions—and starts getting threats.

In the second book (Knife), Holly's wealthy friend Caroline West, who's started a cupcake business with "Cookie" Cutter, owner of the local Christmas craft shop, is accused of killing Derek Waggoner, who started to put the moves on her during a date arranged by her disapproving parents (they hate her working "in trade") after one of the monogrammed knives from her shop is found to be the murder weapon. Holly can't let her best friend take the rap, and once again starts asking questions. And once again starts getting threatening notes. Sheriff Gray—whose romantic status with Holly amped up in the first novel, but now appears to be off—tells her to stop asking questions.

Of course if she does, the mystery stops here.

I love the town of Mistletoe, Holly's parents, Cookie, Caroline, and even Cindy Lou Who, Holly's cat. I want to visit there during the Twelve Days of Reindeer Games, as they all sound like a blast. I like the fact that Holly's talent at making glass jewelry has borne fruit. I like the moody sheriff formerly of Boston. I love the people of Mistletoe; it's the ideal small town. It's Holly I'm not sure I like. Oh, I love her pluck, but, especially in the first book, she seems immature. I also am irritated that the romance between her and the sheriff took off so quickly; I would have liked to have seen it build. But to be honest I am tired of romances in cozies, especially with the male always being impossibly handsome and heroic. Plus she ends up in distressing danger at the end of both novels; her predicament in Knife is particularly creepy. But I'm a Christmas fan to the end and will be keeping Frost's next "appointment" in Mistletoe.

Something for Christmas in July

Why A Christmas Story is the Greatest Holiday Movie Ever Made.

What is an American? 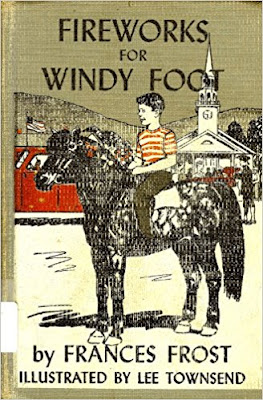 We're back with the Clark family of Vermont for a July read. Between 1947 and 1956, Vermonter Frances Frost wrote four "Windy Foot" books about a Vermont farm family that saw them around the year, starting at the late summer/early fall county fair, continuing at Christmas and in the spring, and ending on Independence Day. Read more about the Clarks in this post about Maple Sugar for Windy Foot.

As mentioned, I didn't know the fourth book in the series existed until a few years ago. Reading it today is half an exercise in nostalgia, but it's also still relevant to current events.

Toby and his younger sister come home on the last day of school excited: there is going to be an Independence Day parade in town and Betsy is going to be on a float honoring modern farm women with her bull calf Kris while Toby is going to be the flag-bearer in a recreation of the famous painting of George Washington crossing the Delaware. But Toby—who must be the most good-natured, friendliest kid in the world (unless you try to hurt Windy Foot)—has a bee in his bonnet: the eighth grade boy who was chosen to portray George Washington is an Italian boy who came to Vermont six years ago. His parents aren't even citizens, Toby protests, so why should he get to portray the First President of the United States? His family is disturbed by his attitude and his father tells him that until he thinks a little bit more about this business he won't be allowed to carry the flag in the parade. Toby is shocked, and even more shocked when all his friends think Pietro, the Italian boy, is a great choice.

As Toby helps his dad repair their house which was damaged in the spring by a flood, Jim Clark doesn't lecture Toby as they paint a room or even look at the stars together. He won't give him the answer; that would be too easy. Instead he asks Toby to think—with simply an occasional offhand question or remark that makes the boy rethink immigration and what makes an American. But when Pietro himself does the Clarks a kindness, can Toby use what he's learned to see the truth?

Fear not, the plot isn't all serious thought: there are band concerts, family fun, horse training, farm adventures, and a visit from Toby's best friend Tish Burnham. But it's Toby's revelation that makes this one special.
Jotted down with a jingle by Linda at 6:00:00 AM 0 comments