Here's "The Legend of Sleepy Hollow," narrated by Bing Crosby.

Halloween Alliance
Jotted down with a jingle by Linda at 9:45:00 PM 0 comments

"Autumn burned brightly, a running flame through the mountains, a torch flung to the trees."

Carve your own pumpkin.
Jotted down with a jingle by Linda at 5:24:00 PM 0 comments

Everything is now painted except the "snow" on the bottom level. I am detailing this a bit with—believe it or not—Elmer's glue. With the "nose" of the glue bottle, I draw an outline of a shape that is supposed to look like a snowdrift or just something covered with snow, then fill it in with the glue. Then I let it dry. Then I put another layer on certain areas, and a third layer on a couple of them. I realized that since I am using paint instead of the previous cotton, the area will look flat. The glue "drifts" and piles are there to give it a little contour. Once I have them the way I want them, and they are dry, I will put a coat of white paint on them and then scatter that with various kinds of glitter. I have some white glitter from JoAnn that almost looks like flocking (great for snow!), a fine white glitter, and one small tube of white glitter that is in hexagon shape. (These are from the little six to four tube glitter sets JoAnn has in its dollar bins.) I don't want to waste the hexagon shape; it's a good highlight. I also just found that one of the collections has a glitter that looks like clear beads...may use a dribble of that, too.
Jotted down with a jingle by Linda at 12:01:00 PM 0 comments

I had to bring something downstairs to the "holiday closet" during lunchtime today and looked up to see the box with our "ceppo." You might call this an "Italian Christmas tree." Most ceppos are pyramid shaped, but this is an alternate style. A traditional ceppo usually has a Nativity scene on the largest level, and other levels contain food gifts and other little Christmas keepsakes, with candles on each level on each of the four corners.

This was the only Christmas decoration I put up the year my mom died. 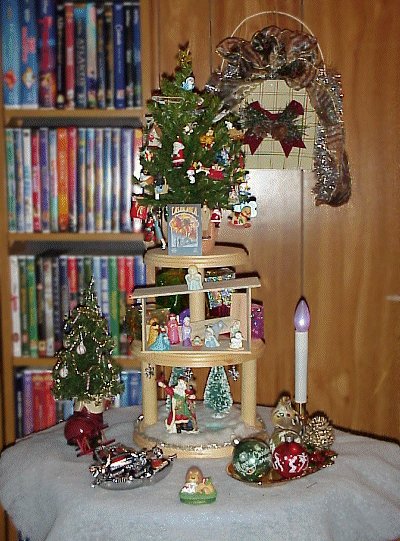 We always put it in the den in the old house; the tree was upstairs in the living room, a room we seldom used unless we needed a book (the library was located there), had company, or at Christmas. The miniature tree on top was our tree downstairs in the den, where Bandit and later Pigwidgeon lived and where we spent all our time.

All the decorations on the ceppo were packed in a cardboard box with the ceppo, which I had built several—maybe it's more like "many" since I'm pretty sure it's at least twelve years ago!—years ago from two circular plaques 8 inches in diameter, one 6 inch diameter circular plaque, and a 1 inch diameter dowel cut into three pieces, after seeing a drawing of one in the book Celebrate the Wonder. I finished it right before Christmas, so never got a chance to paint it before it was time to decorate. You can tell in the photo that it is still "au natural."

And every year, instead of keeping it out to paint, I bundled it away immediately because it had to go to the very back of the top shelf of the little closet we used for the Christmas decorations if everything was to fit.

Seeing the box down in the new, larger closet, unencumbered and not containing anything but some silver tinsel rope and the little nativity figurines, made me think once more about painting it.

I decided to paint the bottom shelf white since the figures there are for a snow scene with St. Nicholas. The "snow" I had previously was made of cotton balls; I want to paint the lower level and then treat it with the three types of white glitter I have to simulate snow. The second level will be painted a sand color since that is where the little nativity set, a Hallmark miniature set which I bought one year at Thalls Pharmacy in Cranston, will go. I am thinking of getting some little trees or bushes to go in the rear to make it look more realistic. Since in the past two years I have put the ceppo on the china cabinet, where you can't see the top level, I could just paint that level white also, but should I find another place for it, I would love to put the angel and the star up there, as it used to be when I originally built it (before I had the miniatures tree on top). So I would want it blue for the sky.

My original thought was to paint the edges of the "rounds" and the vertical dowels in silver, to match the silver snowflakes I had around the top edge of the bottom level. Then I found a bottle of "Metallic Blue Pearl" from a previous project in my paint stash. I decided to use that for the top level and it is so lovely I want to use it for the edges and the verticals as well. The silver snowflakes will go perfectly with the silvery blue paint. I'll need to buy another bottle first, I think, as well as the sand-colored paint. So that's what this week's Michael's coupons will go for.

[Later: Well, cool! I may have enough of the blue after all...I'm crossing fingers. For the second level I painted the area that will be in the back a sage green I had, then dry-brushed a little brown and yellow on it so it would look like winter grass. At the front where the stable will be I mixed up "beachcomber beige" and "real brown" from my small set of Apple Barrel gloss paint set and made a sandy area, which I sprinkled with a little bronze glitter and a little gold glitter...not enough to make it glitzy, but just to give it a little shimmer where the Christ Child will be. (90 percent of it will be under the stable structure anyway!) Then I gave a first coat to the edge with the blue. It looks like I have enough for a second coat, which is all it may need.

Then all I need to do is put another coat of white on the bottom level and sprinkle it with the different white glitters.]
Jotted down with a jingle by Linda at 5:41:00 PM 0 comments

"The Leaves at Play"

Come and watch the merry little leaves at play:
Jolly times they're having this October day.
Down they gently flutter like the flakes of snow;
Chasing one another, flying to and fro.
Don't tell me they're only driven by the wind;
I am sure they 're doing just as they've a mind.
See those two go racing swiftly down the street!
Red 's ahead, now yellow, which think you will beat?
Over in that corner there's a dancing-class,
See them wildly waltzing o'er the withered grass.
They have lively music, led by Mr. Breeze,
Listen to his whistling up there in the trees.
Some have gone in swimming down in yonder nook,
See that host of bathers diving in the brook.
There a crowd has gathered in an eager talk,
Now they're widely scattered all along the walk.
So they gayly frolic through the sunny hours, .
Careless of the winter with its icy showers;
But the cold is coming, and the snow-drifts deep,
When, their playtime over, quietly they'll sleep.

Thou comest, Autumn, heralded by the rain,
With banners, by great gales incessant fanned,
Brighter than brightest silks of Samarcand,
And stately oxen harnessed to thy wain!
Thou standest, like imperial Charlemagne,
Upon thy bridge of gold; thy royal hand
Outstretched with benedictions o'er the land,
Blessing the farms through all thy vast domain!
Thy shield is the red harvest moon, suspended
So long beneath the heaven's o'er-hanging eaves;
Thy steps are by the farmer's prayers attended;
Like flames upon an altar shine the sheaves;
And, following thee, in thy ovation splendid,
Thine almoner, the wind, scatters the golden leaves!

Woot! The homes being toured this year are on Whitlock Avenue. This used to be the "ritzy" area and the homes are all big Victorian/Queen Anne types with wraparound porches, chandeliers, and "all the trimmings," as they'd say in The Right Stuff. The Christmas decorations should be quite nice.

This year's tour is December 6-8. Tickets can be purchased at the Marietta Historical Society office at Marietta Square (it's not on the square; it's across from the train tracks, opposite the little engine and tender).

(Ah! And the Mistletoe Market is in two weeks at the Cobb County Civic Center. Why they hold the darn thing in October is a mystery, but...there it is...)
Jotted down with a jingle by Linda at 6:59:00 PM 0 comments

A Site That Keeps Getting Better and Better

George Nelson adds more to this site every time I check on it. There's now a section on angel chimes, vintage advertising, reminisces by people who remember Christmas trees with candles and the arrival of the early lighting outfits, and more. You could literally spend days reading on this site.
Jotted down with a jingle by Linda at 9:12:00 AM 0 comments