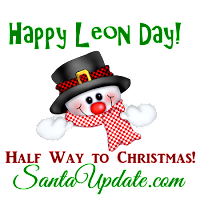 It's not only Rudolph Day, but since it's June 25, it's also "Leon Day" (Leon = Noel spelled backward), with six months until Christmas. Garlands and bows are already appearing in craft shops. This brings the trappings of Christmas to mind: the candles, the carols, the special food, the special services at various houses of worship, the creche, the scents. There are many trappings of Christmas, and one of the most celebrated are the gift givers: Santa Claus, Father Christmas, St. Nicholas, La Befana, Grandfather Frost, the Three Kings, St. Lucia...

Santa Claus goes back many years, and Katharine Lee Bates, the woman who gave us "America the Beautiful," popularized the idea of Santa Claus having a wife (although stories mentioning Santa's wife were written earlier) in her 1899 Goody Santa Claus on a Sleigh Ride. But what about Santa's family? Does he have one aside from his wife? Two very different books explore this idea. 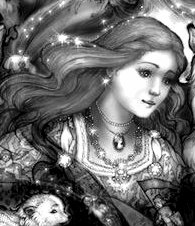 The Legend of Holly Claus, Brittney Ryan
Holly Claus is a lush fantasy in the style of 19th century writers like Frank Stockton and Abbie Farwell Brown, and stories like Burnett's Rackety-Packety House, Davy and the Goblin, and Baum's Queen Zixi of Ix, with touches of the Oz books and Andrew Lang's color-titled fairy tale collections. In Ryan's Christmas world, Nikolas, king of the Land of the Immortals, lives in a beautiful castle in a land where the famous names who live forever come when they gain immortality—Galileo, Cadmus, fairies, Roman and Greek gods, centaurs, artists, scientists, religious figures, and more—along with his wife Vivienne. Nikolas' greatest joy is his annual Christmas journey giving gifts to children, and every year he looks forward to their letters. Then one year a young boy named Christopher writes him an unusual letter. He asks for nothing; instead he asks what Santa Claus wants for Christmas. There is no question for Nikolas or Vivienne. What they want is the one thing that does not exist in the Land of the Immortals: a child. A year later, in the autumn, they become the parents of a daughter they name Holly. At her christening party she is showered with gifts both esoteric and practical.

But as with the Sleeping Beauty, there is one being who does not wish Holly well. The evil Herrikhan began his life as a boastful young man who became a cruel king, who then wished to be worshiped as a god. He was punished for his cruelty and his vanity, banished to a wasteland. The only thing that can save him would be a pure heart, given to him from the owner of thus freely. Herrikhan knows Holly will have that pure heart. He escapes his prison long enough to encase Holly's heart in ice. For the rest of her life, unless she gives her heart to him willingly, she will only be able to stay in cold places.

Holly lives an enchanted childhood, playing with her dear friends Tundra, the wise wolf; Alexia, a talkative fox; Euphemia, a snowy owl; and Empy, a little penguin, watching centaurs play games, entertained by fairies, tutored and protected by Sofya, her Russian godmother. But as she grows older, she learns she's not just "sick," she's cursed, and not only does she wish to overcome the curse, but she wishes what every growing young woman does: to go out to live her own life and do some good in the world. Her terrified parents wish that she wouldn't, but Holly knows she must go out into the world, to the place she calls the Empire City (New York City), because it holds the key to her fate.

This is not a fairy tale for younger children. This is based on tales like the original Grimm stories, with cruelty and death appearing. Herrikhan is the embodiment of pure evil and when he first comes to curse Holly he kills Tundra's beloved mate Terra in a terrible way, then curses Holly with no remorse. Ryan remains close to the 19th century fairy tale model by using language that would be appropriate in those stories. For those willing to accept those precepts, this is an amazing and magical tale. The text is accompanied by gorgeously-detailed pen-and-ink illustrations by Laurel Long.

(There is a children's picture-book version of the story, Holly Claus, the Christmas Princess, with the exquisite artwork hand-colored, but the flavor and the "teeth" of the story are lessened by gentling it for the picture-book crowd.) 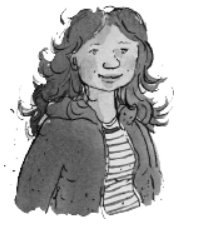 Christine Kringle, Lynn Brittney
On the opposite side of the coin is this funny, fast, and enjoyable take on the Santa Claus legend. In Brittney's Christmas world, there isn't just one Santa Claus, there is an entity called The Yule Dynasty, a family comprised of all the gift-givers around the world. Each year they have a conference, and in Christine Kringle they are meeting in Finland. The American Santa Claus is nervous because he's about to propose a change to the Yule Dynasty rules. For years the Santa Claus mantle has passed from father to son, but Kris Kringle has only a daughter, Christine. Rather than have Christine marry and have her husband carry on the Santa tradition, he wishes that Christine be given the job when the time comes. He knows he will face opposition: the Yule Dynasty is very male-oriented, although there are female gift-givers in the Dynasty, and this will be a hard sell.

In the meantime teenage Christine makes two new friends, Nick Christmas, son of the British Father Christmas who really isn't all that excited about having to inherit the job (he's even allergic to gingerbread), and "Little K," the son of the Japanese Santa, Santa Kurohsu, who's a brilliant inventor. "Santa K," in fact, will be addressing the Yule Dynasty as well, about Little K's new invention, "Living Lights," Christmas tree lights that don't need to be plugged in and which automatically decorate whatever you throw them at in gorgeous festoons. When the two Santas make their proposals, sure enough there is a protest about "a girl" inheriting the Santa title, and worries about the makers of electric lights conflicting with Little K's new invention.

And then everything comes to a screeching halt when Sky News reports that a little town in England, Plinkbury, has banned Christmas. The Yule Dynasty is horrified; what if this custom spreads? And what has happened in Plinkbury? In a mad scheme thought up by Ma Kringle and the members of the Sisterhood (the female gift-bringers), Christine, Nick, and Little K are sent to Plinkbury to find out what's going on. They will be helped by Nick's mother, Zazu, who is a bit of a scandal in the Yule Dynasty world because she's a "tall elf" and kind of a ditz, but at the same time kind at heart, and  Zazu's brother, Egan, who runs a chain of Christmas stores and has a wild plan of his own.

Brittney takes this crazy idea and runs with it for a delightful romp. The whole Yule Dynasty idea is brilliant—it even includes the Germanic disciplinary assistants like Black Peter, Belsnickel, Schmutzli, etc. who run the convention and the security at the convention—and the Living Lights are fascinating and funny (even what they run on is humorous). The "Yules" are written as very human: they have a big party before the conference begins with karaoke and everyone getting a bit rowdy, the ladies plot against the implacable men, Nick has an aversion to Christmas. Several of the funniest gags are, alas, based on stereotypes: Babbo Natale, the Italian Santa, is in love with his Ferrari, has two sons who are bullies, and his elves are Mafioso-like; Pere Noel (the French Santa) has a chubby son who's a glutton; the Sisterhood is forever battling with the male-chauvinist members of the Dynasty, especially Grandfather Frost, whose mother is Babushka, the senior member of the Sisterhood. Brittney also pokes fun at news reporters and Christmas collectors who have to have everything.

Again, perhaps a young adult read, not a children's one, based on some behaviors and also the use of "Christmas Spirit" in gift chocolates to turn the tide. Fall into the fantasy and coast into this one for the fun of it. You'll have a big grin on your face by the time you come out.
Jotted down with a jingle by Linda at 1:47:00 AM 0 comments