The purpose of Rudolph Day is to keep the Christmas spirit all year long. One can prepare Christmas gifts or crafts, watch a Christmas movie, play Christmas music, or read a Christmas book.

For our April edition, you may read online A Little Book of Christmas, by Cyrus Townsend Brady (Project Gutenberg).

Here's a list of the five best Christmas stores in the United States.

Some quotations about Christmas.

Dickens' Finest Song
Everyone has his favorite film version of A Christmas Carol. Many prefer the Alistair Sim offering, while others favor George C. Scott or Reginald Owen. Still others go for the more offbeat versions: perhaps Mr. Magoo's or Mickey Mouse's, or The Muppet Christmas Carol or Bill Murray's Scrooged.

But how many of you out there have close acquaintance with the best version—Dickens' original novel?

A Christmas Carol is none of these. Dickens' simple, to-the-point story is full of delightful imagery that is never captured in any of the versions. Here is his description of Scrooge himself:

"Oh! But he was a tight-fisted hand at the grind-stone, Scrooge! a squeezing, wrenching, grasping, scraping, clutching, covetous, old sinner! Hard and sharp as flint, from which no steel had ever struck out generous fire; secret, and self-contained, and solitary as an oyster. The cold within him froze his old features, nipped his pointed nose, shrivelled his cheek, stiffened his gait; made his eyes red, his thin lips blue; and spoke out shrewdly in his grating voice. A frosty rime was on his head, and on his eyebrows, and his wiry chin. He carried his own low temperature always about with him; he iced his office in the dog-days; and didn't thaw it one degree at Christmas."

Have any of the movies ever described the cold of that Christmas Eve any better than this?:

"Meanwhile the fog and darkness thickened so, that people ran about with flaring links, proffering their services to go before horses in carriages, and conduct them on their way. The ancient tower of a church, whose gruff old bell was always peeping slily down at Scrooge out of a Gothic window in the wall, became invisible, and struck the hours and quarters in the clouds, with tremulous vibrations afterwards as if its teeth were chattering in its frozen head up there. The cold became intense. In the main street, at the corner of the court, some labourers were repairing the gas-pipes, and had lighted a great fire in a brazier, round which a party of ragged men and boys were gathered: warming their hands and winking their eyes before the blaze in rapture."

Here's a marvelous passage describing the marketplace at Christmas:

"...There were great, round, pot-bellied baskets of chestnuts, shaped like the waistcoats of jolly old gentlemen, lolling at the doors, and tumbling out into the street in their apoplectic opulence. There were ruddy, brown-faced, broad-girthed Spanish Onions, shining in the fatness of their growth like Spanish Friars, and winking from their shelves in wanton slyness at the girls as they went by, and glanced demurely at the hung-up mistletoe. There were pears and apples, clustered high in blooming pyramids; there were bunches of grapes, made, in the shopkeepers' benevolence to dangle from conspicuous hooks, that people's mouths might water gratis as they passed; there were piles of filberts, mossy and brown, recalling, in their fragrance, ancient walks among the woods, and pleasant shufflings ankle deep through withered leaves; there were Norfolk Biffins, squat and swarthy, setting off the yellow of the oranges and lemons, and, in the great compactness of their juicy persons, urgently entreating and beseeching to be carried home in paper bags and eaten after dinner. The very gold and silver fish, set forth among these choice fruits in a bowl, though members of a dull and stagnant-blooded race, appeared to know that there was something going on; and, to a fish, went gasping round and round their little world in slow and passionless excitement."

The whole book is full of such delightful passages. The spirits are more mysterious, the villainous Old Joe and his compatriots more sinister, the Cratchits more affecting...characters appear often ignored by the films and more venues appear. Treat yourself this year to the original, Charles Dickens' "little Christmas book," A Christmas Carol.
Jotted down with a jingle by Linda at 12:17:00 AM 0 comments

Other cool ornaments I noted:

• A cute miniature Snoopy and Woodstock

• A "talking" Ralphy in the pink pajamas

• A Robby the Robot

• A new Marjolein Bastin ornament (a cardinal on a garden gate)

plus, of course, all sorts of Santas, snowmen, and Snoopys, superheroes and Barbies, angels and of course the Child in the Manger.
Jotted down with a jingle by Linda at 6:44:00 PM 0 comments 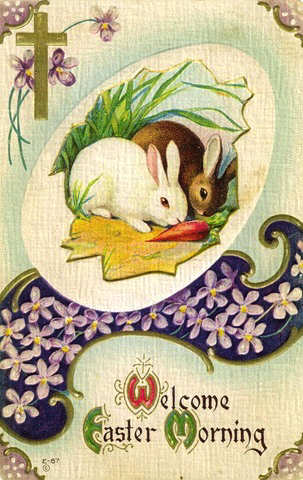 Our friend Mel mentioned this special prayer in a recent e-mail: Jews Ready Blessing of the Sun for Passover

Today did some quiz questions about Passover this morning. I remember reading the story in my children's Bible. Everyone remembers the lamb's blood and the slaying of the firstborn, but do you remember all the ten plagues? They were:

Pesach : History and Meaning of Freedom in Faith
Jotted down with a jingle by Linda at 9:56:00 PM 0 comments