Perhaps it's stereotypical, but thoughts of Christmas preparations bring to mind Santa Claus' most beloved helpmeet, his wife. His story has certainly pre-dated hers, but when did she first appear? Wikipedia sums it up quite nicely:

One of the most famous representations of Mrs. Claus is Katharine Lee Bates' "Goody Santa Claus on a Sleigh-Ride."

Here's a neat discussion about a side of "Goody Claus" you might have never thought of.

And a bit more about Mrs. Claus' American origins.

How about Mrs. Claus astrologically?

The Guideposts Christmas Treasury
This is a little gem of a book with short essays, stories, and poetry devoted to the spiritual aspects of Christmas, published, of course, by the Guideposts folks. This particular volume is from 1972 and reeks 1970s with its opening fonts and illustrations of clean-cut guys with the "dry look." However, many old standards are here, from Dorothy Canfield Fisher to Pearl Buck to Taylor Caldwell, to short inspirational pieces and poems taken from "Guideposts" magazine. This is a perfect book for bedside reading during Advent and Christmastide.

We had things to do today, so we got to the Hallmark Ornament Premiere late in the afternoon, and we didn't go out to our usual store, but just went to the mall. Several of the ornaments I was interested in, like the "Two Turtle Doves" and "Up on the Housetop," plus the quirky "Santa's Rooftop Racer" that James was interested in, were already sold out there. Perhaps it was my mood because of work, but I didn't see a lot that really interested me. I bought the miniature cloisonne blue jay and the "Peanuts" Thanksgiving ornament (how often do you see Thanksgiving ornaments? the rest were all stinky Hallowe'en), and James got this year's airplane. 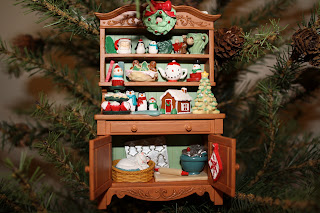 It's "Mrs. Claus' Cupboard"—and, to quote Daisy Dalrymple, "Isn't it spiffing?" They offered it in white last year and I really didn't like it, but in brown it is absolutely lovely. If  you were in a tiny, tiny apartment, you could put a couple of Christmasy bottle-brush trees on either side of it and have a complete Christmas in microcosm.

Will probably go back in the upcoming weeks to see if they've restocked.
Jotted down with a jingle by Linda at 9:56:00 PM 2 comments 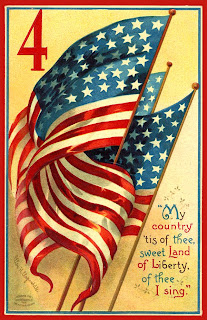