Hurrah! It's Leon Day! Only six months until Christmas! Have you begun your Christmas shopping yet? Don't let the holidays leave you with another enormous bill in January; start buying now, as soon as you see something you know a friend or family member would like. These can be hidden in boxes under beds, in the dark corners of closets, if they are not perishable in the high corners of the garage or the attic, etc. Gift cards from established stores can be purchased now and put away. Don't be afraid to shop clearance sales—some beautiful items can be found marked down and they can be stored away for the next five months.

Summer already on your last nerve? Yeah, me, too. Here are three Christmasy pictures to cheer  me  you up: 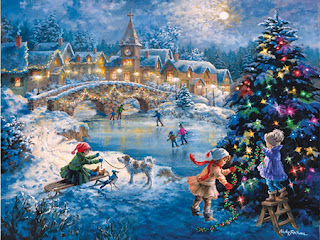 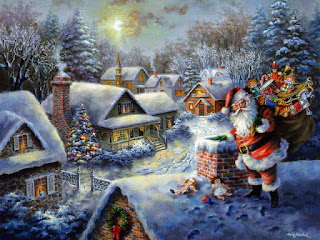 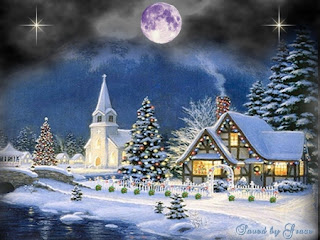 1001 Christmas Facts and Fancies, Alfred Carl Hottes
This is a grand little book about Christmas that I first read at the library and then found an inexpensive copy online. It is the sort of Christmas book I like, with chapters about different aspects of Christmas: the history of Christmas celebrations, customs in different countries and traditional foods in those countries, kinds of Christmas trees, legends and stories of Christmas, etc., all illustrated with black-and-white scratchboard and pen-and-ink.

The chief draw of this book is that it was originally published in 1937. My edition is postwar, from 1946, but the text remains the same, so that "current Christmas customs" have no mention of synchronized singing-and-dancing house lights, computer graphics, and other 21st century garnish. Indeed, the author shows a slight scorn for artificial decorations and plays up fresh greens and real trees. He even opens with a definition of Christmas that includes Santa Claus leaving gifts in stockings and on (not under) the Christmas tree, which was the original custom,  for everyone who's ever puzzled about "I'll Be Home for Christmas" and the line about "presents on the tree." (I read a story taking place in World War II which had a man in his twenties questioning that line, which I knew was wrong; a man that age would have remembered when gifts were hung on the Christmas tree. Books published in the late 1940s still mention this custom.)

(Another old custom which I has vaguely heard of Hottes quotes as common: leaving a red candle [specifically red, in a green candle holder] lighted as a Christmas decoration. I thought that was solely an Irish custom, but apparently it was popular in the United States as well.)

In the 1930s the fascination with medieval Christmas feasts seemed to have still been in effect, because there is a lively chapter about a Yuletide banquet in a medieval castle, with its odd foods like peacock served in its own feathers, bread trenchers used as plates, traditional games like Hot Cockles, etc. Another chapter dealing with Christmas music includes the original English translation for the now classic "Silent Night," words different than we know them today. The stories about Christmas in other lands come directly from descriptions written by people who were there observing them, so they are different than the usual canned narrations used in other books.

People interested in vintage Christmas customs will probably enjoy Hottes' compilation. It can be read in chapter order, or one can dip in and read what interests them. And, thankfully, it doesn't contain any dialect-heavy "happy memories of plantation life" stories like many of these older books.
Jotted down with a jingle by Linda at 1:25:00 AM