Do you like mysteries? I do. Most of my favorites are within what is called "the cozy" realm, amateur sleuths solving crime. I cut my teeth on the early Bobbsey Twin rewrites, where they solved mysteries and were brought into the present time (the Twins debuted in 1904), and while not a reader of Nancy Drew or the Hardy Boys, still love Trixie Belden. 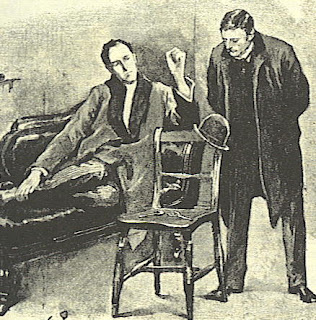 The classic old Christmas ballad "The Mistletoe Bough" is at its heart a mystery story, and many classic writers have set short stories at Christmastime: Agatha Christie had at least two, "Hercule Poirot's Christmas" and "The Adventure of the Christmas Pudding" (in which some astute kids help the Belgian sleuth. One of my favorite mystery story heroes, Lord Peter Wimsey, solves a Christmas theft in "The Necklace of Pearls." Anne Perry publishes an annual novelette set at Christmastime and Victoria Thompson and Rhys Bowen have produced Christmas adventures with their regular characters. And of course Sherlock Holmes solves a Christmas mystery in "The Adventure of the Blue Carbuncle."

This month I had two mysterious Christmas treats:

Holmes for the Holidays, edited by Martin Greenberg, Carol-Lynn Rossel Waugh, and Jon L. Lellenberg
I've been waffling about buying this book for years, so when it turned up at a library booksale at a deep, deep discount, it was a sign. As you may have guessed from the title, this is a collection of Sherlock Holmes stories with a Yuletide theme. Several of my favorite authors—Anne Perry, Barbara Paul, Gillian Linscott (who writes the Liberty Lane mysteries under the name "Caro Peacock")—had stories in the volume as well. Sadly, I figured out the Perry story immediately, although her narrative was good. Paul's story, about a thief stealing from Christmas charities, was much better. I had read the Linscott before, in another volume of Christmas stories, but found it just as enjoyable as the previous time; it is narrated by a girl spending Christmas in Switzerland. Gwen Moffat's story also features a child who is affected in the murder of a countryman in a hiking accident—but part of the mystery is being covered up.

"The Adventure of the Three Ghosts" and "The Adventure of the Christmas Ghosts" both riff off Dickens' A Christmas Carol as if the events actually took place. Another story takes place at Twelfth Night and has Watson discovering what happened in an old case he helped Holmes investigate, while a dog figures in the tale of a man having dreadful dreams. Holmes' "Christmas Client" is a mathematician who is hiding a literary secret, while he must rescue a woman wrongly accused of murder in "The Adventure of the Angel's Trumpet."

All of the stories are of some interest, although I thought "The Italian Sherlock Holmes," while colorful, a bit boring. My favorite is the Linscott story.

If you enjoy this book, there is a second collection of Sherlock Holmes Christmas stories—and of course Doyle's classic "Adventure of the Blue Carbuncle."

Wagging Through the Snow, Laurien Berenson
I had an opportunity to read this new Melanie Travis mystery as an ARC on Netgalley, as I've always enjoyed her dog-show based mysteries. However, I was a bit irritated to discover that they want full price for this story when it's really only a novella.

Thanksgiving has barely concluded when Melanie's brother Frank, once a bit of a sad sack, but now a successful business owner, husband, and father, arrives at the Driver home with exciting news: he has taken the profits from his business (a coffee shop called the Bean Counter) and invested in a new business, a Christmas tree farm. Trouble is, he hasn't told his partner (Melanie's ex-husband) he did so and wants Melanie to tell him. Understandably, Bob Travis is a bit irritated, so Melanie and her family (and redoubtable Aunt Peg) accompany Frank and Bob when they go to check out the property, which is run-down but promising. Unfortunately, they also find a body in the woods, an alcoholic homeless man named Pete. Everyone thinks it's an accident—until a friend of Pete's appears and says Pete had stopped drinking and there's no way he walked into that "accident." So once again Melanie is sleuthing as she tries to shop, bake, decorate, and listen to gift hints from her two sons.

This is a quick, festive read, with the reclamation of the Christmas tree farm almost more interesting than the mystery. I loved being with Melanie and her family for Christmas, but the mystery is almost too slight. Another subplot and a full book's worth of story would have helped.
Jotted down with a jingle by Linda at 1:21:00 AM