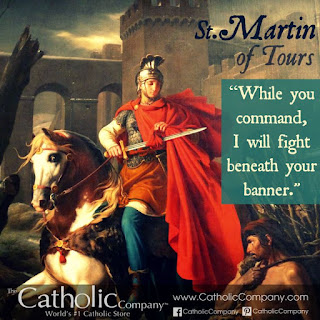 You might hear this charming saying in the Czech Republic or Poland or some other Balkan countries, commemorating St. Martin of Tours, the soldier who became famous for tearing his beautiful cloak in half to give the half to a beggar he found shivering on the road. Since then he's been a patron of the poor. If you see "St. Martin on his white horse" it means that it is snowing.

His saint's day falls on November and is also known as "Martinmas." Back in earlier centuries, Advent was celebrated in a similar fashion to Lent and was a fasting period except on Sunday, and it also lasted forty days and began on Martinmas. In honor of St. Martin's Day and the original start of Advent, here are a couple of Christmas books that span media styles (some horses involved, but no white ones):

The Triple Dog Dare, Joanna Wilson
Wilson, the nostalgic writer behind the blog "Christmas TV History," and with two books about the subject under her belt, was curious if anyone has ever sat through the entire TBS/TNT 24-hour marathon of 1980's marvelous masterpiece A Christmas Story, and what it would be like to do so. She found one blogger who had, but that person had just used the time to catcall the film. Wilson wondered if in watching she could figure out the answer to some questions: why is the movie so popular? Are there any movies that would make a better marathon? Why is Christmas Story so popular as a marathon movie anyway? (2017 makes the 20th year it will be shown in a marathon format.) Would she hate the movie after she saw it so many times? And she was going to watch it with commercials! Would they drive her crazy before Ralphie did?

With her boyfriend's help, Wilson set up her experiment for Valentine's Day weekend so her real Christmas plans would not be interrupted by her experiment. She put up a tree, played Christmas music, had Christmas cookies. She even managed to find a copy of a broadcast with commercials from the 1980s (her boyfriend pinpoints the date from sports scores mentioned during the broadcast), so her commentary on 1980s commercials and "must have" gadgets become part of the text. She notices bits she's missed over the years even after viewing the film so many times, discovers many parallel scenes, and even familiar faces from recent television shows. Along the way, she references several times a book I didn't realize anyone else remembered: the 1968 Seven Glorious Days, Seven Fun-Filled Nights by Charles Sopkin, who uses six televisions to watch a week's worth of network programming to comment about Newton Minow's "vast wasteland." (I can tell you without looking at the book what week he watched: April 23-29, 1967, because the Lassie episode he describes is "Goliath.") I love that on each run she notices something different: behind the scenes actors in one, the music in another, the scheming of the kids in a third, etc.

If you're a Christmas Story fan or just wonder who would do such a crazy thing, you'll probably enjoy this exploration of leg lamps, Christmas nostalgia, and "you'll shoot your eye out!"

A Christmas Carol Christmas Book, Tim Hallinan
This was only a buck at the library book sale and I keep looking at it every time it shows up, so this time I finally "done the deed." It's a thin, coffee-table size book put out by IBM to celebrate the release of 1984 television version of A Christmas Carol with George C. Scott. The first third of the book is a "photonovel" ('member those?) of the film and the last third is a complete version of the novel. In between are four sections about Charles Dickens and how the Carol came to be written and how the family celebrated, about Victorian crafts and traditions at Christmas, of typical Victorian holiday food and drink offerings, and about caroling.

Obviously, if you're a big fan of Scott's Carol, this will have the most draw for you, and you'll have a copy of the original book, too, which is a big plus as far as I'm concerned! The historical chapters are cool as well if you've never read anything about Victorian food and games. A nice primer to the Dickens' era.

(But everyone knows the best version of Christmas Carol is Mr. Magoo...[winks, ducks, and runs])