Rainy, With a Chance of Kringly 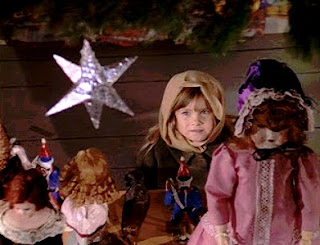 The forecast of rain precluded us going to Chattanooga today, so we had an alternate idea: we'd go up to Books-a-Million for a hot cocoa and a look at the calendars, and come back by MicroCenter to return something we'd bought that we didn't need. Well, the weather report seemed to indicate the rain would start at noon and end right after three, and we didn't want to rush, so we put off the book trip. Since we don't have to cook for Christmas Eve (much), we can go up there tomorrow.

Instead, after breakfast we returned the item to MicroCenter, then, because we were halfway there, made a quick trip to Trader Joe's for a tea James liked, got a little more peppermint bark (the Peppermint JoJos were completely gone), and then headed for Ollie's Bargain Outlet, as James was looking for new bungee cords to hold the tarp on the power chair. We picked up a gadget that is supposed to air fry in the oven (and if it doesn't it's only $10 wasted) and I found the same three-calendar set as I did last year, so I can have a small calendar near the computer. It has become so hard to find calendars smaller than 7x7 anymore. There used to be several sources: Michaels, Kmart... We got home right as a few specks of rain tapped the truck window.

Had lunch to M*A*S*H Christmas episodes, then did a spate of vacuuming while James was making more breakfast burritos. This will get him past Twelfth Night before he has to do any more. Once he finished, did two more M*A*S*H episodes, and finally The Best Christmas Pageant Ever, after which we left for supper, timing it just as the mailman arrived, with another Christmas card from a friend, and two Christmas packages from two different friends. And the rain? The few specks of rain went away until about one, we had about a half hour of hard rain, and then, whoosh, it was gone. We even saw a brief gleam of sun until the clouds closed up again.

Oh, well, I can't say I wanted to drive up to Chattanooga two days before Christmas...

Supper was at Fried Tomato Buffet (it's barbecue rib night) and we came home by Kennesaw Avenue to see the decorations on all the big old houses, and then went past our old neighborhood to see if they still do luminaria in Dunleith. If they do, it wasn't tonight. We did go past one of my favorite houses; among all those modern designs, there is a house that looks like a colonial saltbox, complete with a period door, etc. They still just use plain white candles and plain green wreaths and red bows, although the white electric lights on the big pine tree out front kinda ruins the period effect. 😃

More Christmas specials tonight: Father Christmas, The Snowman, The Night Before Christmas, "Christmas at Plum Creek" from Little House on the Prairie, and finally The Best of the Andy Williams Christmas Specials. Snowy sang blithely to all of them!

The only sobering part of today is waiting to hear about James' mom. She and his sister went to visit his sister's daughter and husband and their little boy up in New Jersey, and Mom was not feeling good, so they went to the emergency room. She is not critically ill, but she's stuck in the hospital while they are doing tests to see what is causing her shortness of breath, and who wants to be in the hospital at Christmas, even if it's the best hospital in the world?
Jotted down with a jingle by Linda at 11:48:00 PM