Trim Up the Tree!

I threw my schedule to the wind today (it's housecleaning day, which mainly means scrubbing the bathrooms) and first toted all the packages and cards to the post office (when did parcel post get so expensive? there's only a dollar difference between parcel post and priority mail!) for dispatching, then came home, cleaned everything out of the corner (the rocker will sit in the other corner, in front of the phone, awkwardly, until the season is over) and commenced to decorate the tree.

Except I had to fuss over the lights. Again. Last year the Lightkeeper Pro gadget saved my bacon. I had one half of the middle section of the tree lights out and about three pulls on the Pro reconnected the circuits. This year, no dice. I tried the other method, which is something like using a stud finder for the Pro to find where the broken circuit is, but nothing would revive the string. I even tried replacing all the burned out bulbs, until I ran out of replacement bulbs and that didn't work. Almost every bulb in the string must be burned out; no wonder it won't light.

Now I did have extra strings of fifty lights that I bought for the miniatures tree. I had to finagle it, using the extension cord I use for the star at the top of the tree, which is dropped down the trunk. I fastened the string in place and, well, it worked: the middle of the tree doesn't have a dark spot. 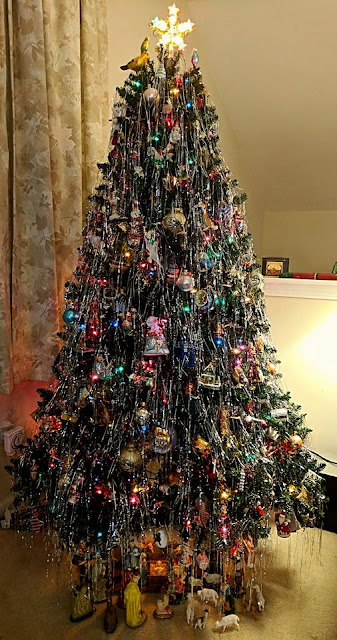 In the last few years I've wondered if I have too many ornaments on the tree. I try not to add any more, but occasionally a Hallmark ornament or two catches the eye. This year I put the new ones on the little shelfy things on the television. But which of the older ones would I discard? My tree (actually all the trees) isn't a color or flower or specialty "theme" tree fit for a magazine shoot. Each of the ornaments on the main tree are there because they are loved, from the Carleton Lassie specialties to the glass budgies to my beloved satin balls to the long ornaments that were my mom's that I tried to fix up and failed at miserably, but James talked me into keeping. It would be like giving away a pet or a child.

The last step is the tinseling. Without it the tree looks naked, just a collection of branches with colorful figurals laid on. This is trimmed from bottom to top so the effect is like a waterfall. This year's weather, while damp and depressing for the past three days, was actually fortuitous for using icicles. I have decorated the tree on a day so warm I had to wear gloves because the strands of tinsel stuck to my perspiring fingers. Today, my fingers were cold through most of the process; uncomfortable, but perfect for pinching four to five strands out at a time and draping them over a branch. It takes a while, but all good things take time.

The final touch is Mother and Dad's nativity set, which is arranged under the tree in a board stable with one yellow light bulb through the convenient hole in the rear near the roof. It's never finished without that.

I like to think of it as an annual magnum opus, my Christmas masterpiece, a painting I do once year. Pretty much all the elements are the same, with some new things tossed in occasionally, but every year they are rearranged in a different pattern. Kind of like life if you think about it.