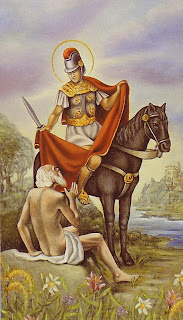 November 11 is also the feast day of St. Martin of Tours. A soldier in the Roman army, Martin is most famous for his act of kindness to a half-clad beggar during a snowstorm. Despite the jeers from his fellow soldiers, Martin took his sword and cut his huge cloak into two pieces so that the man might have half. Later it was revealed that the beggar was Jesus Christ in disguise.

Martin took holy vows soon after, and became so well known for his piety that he was sought out to be a bishop. He did not want the honor and intended to hide from those seeking him. He finally hid himself inside a pen with a flock of geese. However, the geese made such noises of alarm at the human hiding in their pen that the men seeking to make Martin a bishop found him easily. Goose is a traditional dish for St. Martin's Day.

"According to old Czech weather lore, it is the first day on which we can expect snowfall because Martin may arrive on a white horse." In some Northern climes St. Martin's Day was considered the first day of winter.

Back when Advent was forty days in length, like Lent, four days after St. Martin's Day would be the beginning of Advent.

Martinmas
Jotted down with a jingle by Linda at 1:47:00 AM