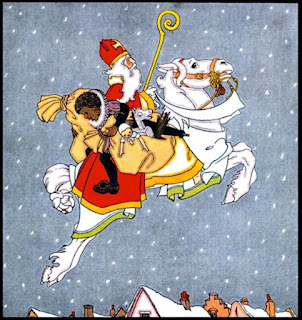 The Story of Santa Klaus, from 1909, attempts to bring the threads of the origins of Santa Claus together.

What Has St. Nicholas To Do With Ireland?

St. Nicholas Day is celebrated most famously in the Netherlands, where he arrives on a ship from Spain accompanied by his servant, "Zwart Piet," Black Peter. Not long ago Peter was an ominous figure to Dutch children: parents would tell their children that if they didn't behave, they would be stuffed in Peter's sack and taken away. (Other Germanic cultures have a similar character, like Pelznichol—"Nicholas in Furs"—or the dreaded Krampus, who looks like a devil with a long red tongue.) Today Black Peter is controversial because he is often still played by people of non-African descent in blackface makeup, and portrayed on wrapping paper in stereotypical fashion with large lips and big rolling eyes. Most illustrators today are like the one above who makes Peter look like a real person rather than a hurtful clown and books like Santa and Pete have reworked the Black Peter character to present him in a positive manner as St. Nicholas' full partner. The modern Peter carries candy, not a sack, and gives out sweets to the children.