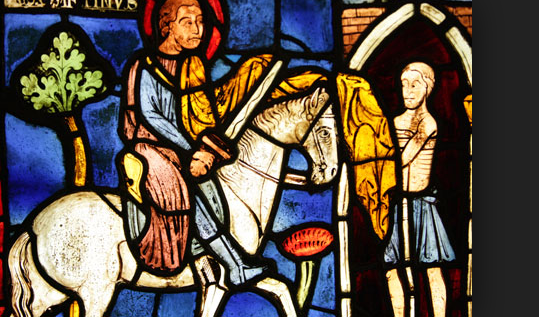 Celebrated on November 11, "Martinmas" is the feast day of St. Martin of Tours, a Roman shoulder who showed kindness to a barely-clad poor man by giving him half of his voluminous Roman cloak. In a dream, Martin found out the "beggar" he had helped was Jesus Christ in disguise, who had baptized him as a Christian. He later became a bishop.

Martinmas was originally the beginning of a fasting season that lasted from November 11 through the Epiphany (forty days, like Lent, with Saturday and Sunday as free from fasting). This period has been known as "Old Advent." Later, Advent was shortened to the four-week period it holds now, although some Christian churches are calling for a return to the forty-day fasting period as in Lent.

A traditional food for Martinmas is roast goose. It was said Martin, a modest man, did not feel himself worthy to be a bishop, so he hid from the elders sent to inform him of the appointment by secreting himself in a goose pen. However, the honking and chattering of the goose gave him away.

St. Martin is traditionally shown riding a white horse (probably a dapple grey horse that has grown white with age), and the saying "St. Martin is coming on his white horse" is used in some European countries to indicate that it is going to snow. Agriculturally, St. Martin's Day represents the first day of winter, so the saying is very apt.

Martinmas is still celebrated extensively in Europe, especially Germany and eastern European countries. The Germans light bonfires in his honor. Beef can also be a traditional meal on Martinmas since, as the beginning of winter, you would have to dispassionately calculate how many animals you could support during the cold season, so cows, pigs, sheep, and other livestock might be slaughtered and preserved at Martinmas so others would survive and so the humans would have food to eat during a time of year when crops did not grow.