On Thanksgiving Day and a Shopping Day 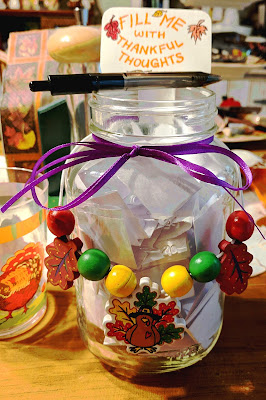 Thanksgiving dawned clear but chilly; wasn't sure I wanted to get up, but Tucker needed to be walked before I could even think of breakfast, so it was up at the usual time. I also picked out the Christmas cards I'm going to use for this year, and signed half of them as I was watching the Macy's parade. I don't usually see about half of the parade because I can't sit long enough to do so; I'm usually doing other things while it runs, but that's okay. Most of the parade ends up being a bunch of singing stars I'm not really interested in, and I see the good stuff like the giant turkey, the balloons, and any clever float. This way I could help James a little, fetch stuff from downstairs, and even get the bed made. By the time the dog show started, we could see a couple of the groups before it was time to get our food together and leave. We'll watch the whole show later, with at least one new dog breed, the Nederlandse Kooikerhondje (it's a bird dog). That's almost as much fun to say as "Nova Scotia Duck-Tolling Retriever." 😀

We were having dinner at Leigh Boros/Robbie Hilliard's house this year. Sadly, the crowd was small. Lin Butler was in the hospital with pneumonia, but the rest of the family came for a little while, and Leigh sent a Thanksgiving dinner home with them. We had a nice feast of turkey (which people kept snitching bits of as Mel carved it), pot roast, a lovely roast of beef, and some corned beef, plus veggie sides and rolls. Most of the guys watched whatever football was on, but I had to laugh, because in the other room we all sounded just like the adults I remember so long ago, gathered in Papà's cellar or in Anna's kitchen, talking about medical problems and crap going on at work. How true that we turn into our parents!

Before long it was after seven and we bundled up and headed home under not-quite-a-full moon. I hadn't slept well, so we just mucked about on the computers for a little while before heading to bed. Sadly, I found it hard to get to sleep, which was deadly this morning when I had an alarm set for 6:15. First thing I did was pad downstairs to the garage. Last night there was a light on my car saying one of the tires was underinflated, and I was worried it was going flat (it looked like the right front). It wasn't flat, so it can be taken care of later. I ran upstairs, got dressed, took my pill, and grabbed a BelVita bar. It was so early in the morning it just made me queasy and I couldn't finish. I did see a stunner of a sunrise, though, although by the time I emerged from Staples (all of ten minutes—I do not go to crowded places on Black Friday, and Target didn't even look that busy) the clouds were already piling up in the east.

Yesterday I had ordered three necessities online from Staples, with free shipping: two different wireless mice, one as a spare and a new smaller one, and a second backup drive. But I had to go there in person for the one thing I wanted: a Chromecast.

Back before we had a "smart" TV, we bought a small cheap computer to attach to the TV, about the size of a Roku box. This was because both GPB and WPBA kept pre-empting History Detectives for god-knows-what, and we would go online to watch the episodes by plugging the laptop into the TV. It was a great way to catch up on other PBS stuff, too, but the plugging in business was awkward. This way we just used the browser of the small computer instead. But now it's very cranky (pretty much all we use it for now is playing Region 2 DVDs). So along comes the "smart" TV. Except the browser in the "smart" TV is makes the crowd in Washington, DC, look like Nobel Prize winners, so that we're still going into the browser on the computer (like for the streaming membership we bought from DragonCon), but it jerks and judders and stutters because the processor is so slow. So I wanted the Chromecast for the same reason, as we have access to everything else it offers.

I also went to Kohl's for a small "suitcase" phonograph. This was a replacement thing: over ten years ago we had bought a combination phonograph/CD player/cassette player at Linens'n'Things. I had a stereo system and James had a turntable, but neither would play Mom's 78s. We had to return the first one we bought because it did not play sound. Well, with one thing and the other I did not try all of Mom's records on it until earlier this year and when I did realized it had an auto shut off. This meant half her records didn't finish; it shut off smack in the middle of "Deck of Cards." Also, in the intervening years the CD had quit ejecting; when I finally got it to open, it wouldn't push back in again. So we dumped it at electronics recycling day and I got this inexpensive one with no auto-shutoff.

Then I did what I usually do on Black Friday: come home, eat breakfast, and then fall asleep for a couple of hours. After that I set up the Chromecast (ridiculously easy) and just surfed over to several websites and easily "cast" to the television. Works a treat. Also plugged in the phonograph. The first Christmas music I officially played after Thanksgiving was Mom's World War II-era copy of Bing Crosby singing "White Christmas." It sounds okay. As far as I can tell from audiophile sites to properly play old 78s you need an expensive turntable and special needles made for 78s. Too rich for my blood.

Anyway, last week James got a Very Interesting Phone Call. (That's "interesting" as in "may you live in interesting times.") You know you are in trouble when the first thing your supervisor asks you is "Are you sitting down?" IBM was cutting everyone's hours to 24/week through the end of the year. So we are now on short commons for Christmas, and it explains why he was not working today.

Instead, for lunch we went out to Hiram and had our big meal at Folks. We both brought something home and had that for supper as well. Michael's had all regularly priced items on sale 40 percent off. I didn't get a lot; just some things to make a gift and a container for some beads. James got some spray paint and wooden bases that looked like a shield. We also went up to Five Below to buy some chocolate for dessert, as they are the only ones who sell dark chocolate Reese's peanut butter cups anymore. And I stopped at Best Buy to pick up our annual copy of the newest season of Big Bang Theory on DVD. Next year will be our last.

It was drizzly raining when we got home. When it got to be dinner time we had our Folks leftovers and did our exercises for the evening. The visiting nurse gave James exercises to do back in May. I knew it's easier to do with a buddy, so I've been doing them with him. We do mostly sitting exercises and then about five minutes of all he can stand on his feet. Tonight we started using weights with our arm lifts. James was lifting five-pound weights at night while I walked Tucker, then he got the rotator cuff injury and had to quit. He has gone back to three pounds and I use the two pound ones. Not much but better than nothing.

Later we watched Masterchef Junior: Celebrity Showdown with celebrities (football players and things and Alyson Hannigan with her daughter). Unfortunately it ran late due to stupid football and the DVR stopped recording just as they were about to announce the winners. I had to look it up the results online. Also watched last night's Murphy Brown.
Jotted down with a jingle by Linda at 11:15:00 PM