C is for Christmas Crafts

One of the things I bought yesterday was the "Carol Towne" subway entrance: 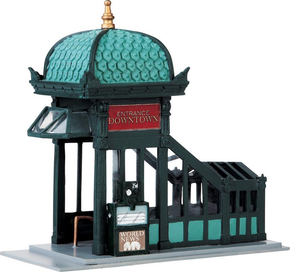 Since about half of the mantelpiece village is a city scene, I thought it would be appropriate between two of the buildings rather than the trees I have there now.

But my scene is wartime/1940s and the Carol Towne piece Victorian era, and it also has no "snow" on it like the other pieces, so this morning I took it into my own "Santa's workshop" and started to work some magic on it. First I aged it just slightly by dry brushing some brown and grey paint on the "onion dome" type top and on the "glass" roof and overhang. I also put some on the floor to the entrance so it will look like people with dirty boots have tramped in and out. On one of the panes of "glass" opposite the newspaper box I drew a "Kilroy was here" figure.

From there I could have just added white paint, but I like the snow to be a little more three-dimensional, so I have used Elmer's glue to make little "snow piles" at the sides and in the cuts on the entrance dome. Right now those are drying and I will paint over with white paint when it is finished. I also used a black paint pen to correct something: the price on the newspaper dispensing machine (which they actually wouldn't have had back in Victorian times, just a newsboy) said "25¢"—good heavens, even magazines didn't cost that much at the time, and not even in the 1940s! So I blotted out the "2."

In the meantime I have printed out two WWII posters on James' color printer: the "You drive with Hitler when you drive alone" poster which I thought appropriate for a subway entrance, and another war bond poster, plus made a home-made sign announcing a War Bond rally for 7 p.m. at City Hall. Those will be glued on the sides of the entrance after it's "snowed." Then it will be finished, although I am toying with another idea. Of course there is no stairway "down" except for a black spot representing the stairwell. I was thinking of buying a figure and then cutting it in half, gluing the top half of the figure on the "stairwell" so it looks as if someone coming up from the subway.

What a very cool idea - love the ascending person!