"On the Third Day of Christmas..."

There's a gift shop called "Love Street" ('cause the original store, in an old house, is on Love Street) that I patronize, and they sent me a birthday postcard with a $10 gift certificate to each of the three stores (one is gifts, the second—next door, another old house—is shoes and clothing mostly, and the third, another old house up the street, is their home store). Before Christmas I used the original Love Street coupon to get a Webkinz camel for Christmas (I named him "Melchior").

Today we went to both the "clothing" store and the home store. All the Christmas things were half off, so I fulfilled two wishes. At the clothing store I bought one of these log reindeer: 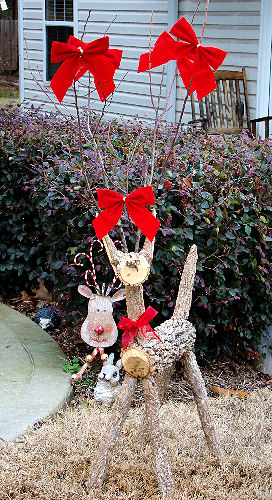 I've always wanted one, but even these little ones cost $30. With the sale and the coupon it was $5 and tax.

At the home store I picked up two gifts for next year and something else I'd always wanted, one of those retro "bottle brush" wreaths, which I put on the library door: 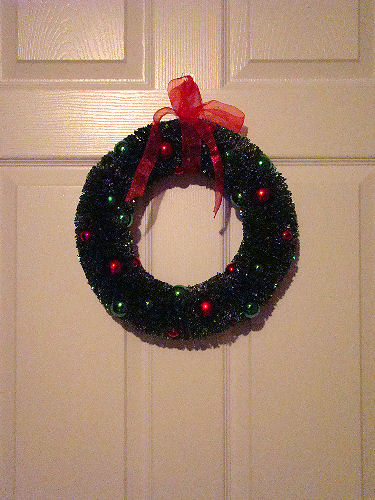 I know it's absurd and it would be $300 for something that really is useless and puts no value on the house, but I would love to put a glass window door on the library. This would look so pretty on a glass door.

Someone asked me about my library tree ornaments that I've been "creating." Here's a couple of details.

In this first photo, you can see in whole the Hallmark Dorothy ornament from The Wonderful Wizard of Oz and their "reading together" ornament, and way down in the lower right is the tree from How the Grinch Stole Christmas. Here you can also see, made from Schleich animals and figures from Hobbytown, and similar figures from Richards and Michaels, Misty from Misty of Chincoteague, Lobo from Wild Animals I have Known, and Pongo from The One Hundred and One Dalmatians.

The little book under Pongo is called Kriss Kringle on a Wheel and is a miniature reproduction of a Victorian book. The feet above Misty belong to the Pokey Little Puppy Hallmark ornament and a German Shepherd representing either Leader in the classic James Garfield book Follow My Leader or Flax in Flax: Police Dog. 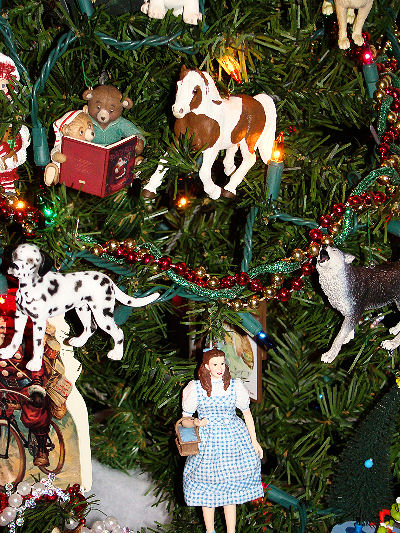 Below, the Hallmark ornaments are Rhett and Bonnie from Gone With the Wind and, down near the left edge, the Ernest Shepard Winnie-the-Pooh and Tigger ornament. There's also Rudolph the red-nosed reindeer.

The rest are Schleich and similar figures: Flicka from My Friend Flicka, Lassie from Lassie Come Home, Bambi as a fawn from Bambi, the West Highland White terrier is McDuff, from the books by the same name, the little bit of a white seal near McDuff is Kotick the white seal from The Jungle Book. The blue robe you see just to the left of Flicka is Merlin the magician from The Sword in the Stone and to the left of Lassie you can just see the footwear and a little of Robin Hood.

Elsewhere on the tree are Zorro, little Red-Riding Hood, Elsa the lioness, Black Beauty, Curious George, Harry Potter, Cinnabar "the one o'clock fox," Hazel from Watership Down, and others. 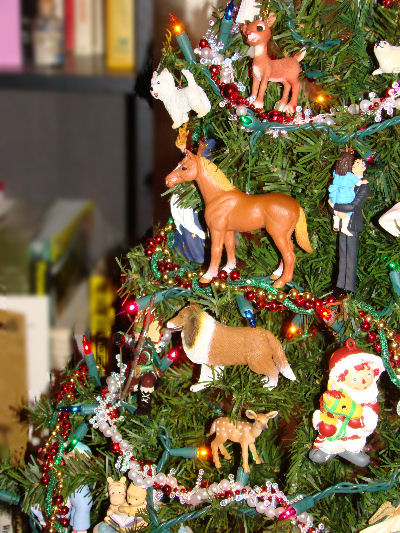 This last photo isn't really a "Christmas decoration" as it's up all year 'round. Some years back, my cousin Deanna (who just got married!), made my mother this ceramic St. Nicholas. It was one of the things I brought home with me. How could I put him anywhere else but on the shelf with my bound copies of St. Nicholas magazine? 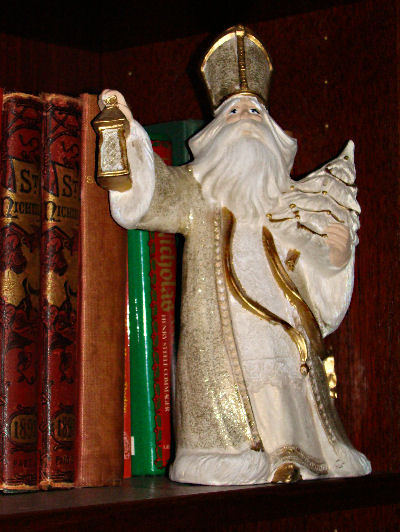